The FX Holden is undeniably Aussie royalty. But for a twist of fate, the first Holden could have had a genuine royal connection, too.

The FX Holden is undeniably Aussie royalty. But for a twist of fate, the first Holden could have had a genuine royal connection, too.

How many cars are required for a royal entourage? If the place was Australia and the year was 1952, the answer to that question is 37.

When the February 1952 ‘Royal Tour of Australia’ by Princess Elizabeth and the Duke of Edinburgh was in preparation, it was announced that 16 Daimlers and 12 Humbers would be required for royal duty, along with six Holden 48-215s and three others.

The car shown here is one of those Holdens and owes its existence to a Royal Tour that ultimately never happened. 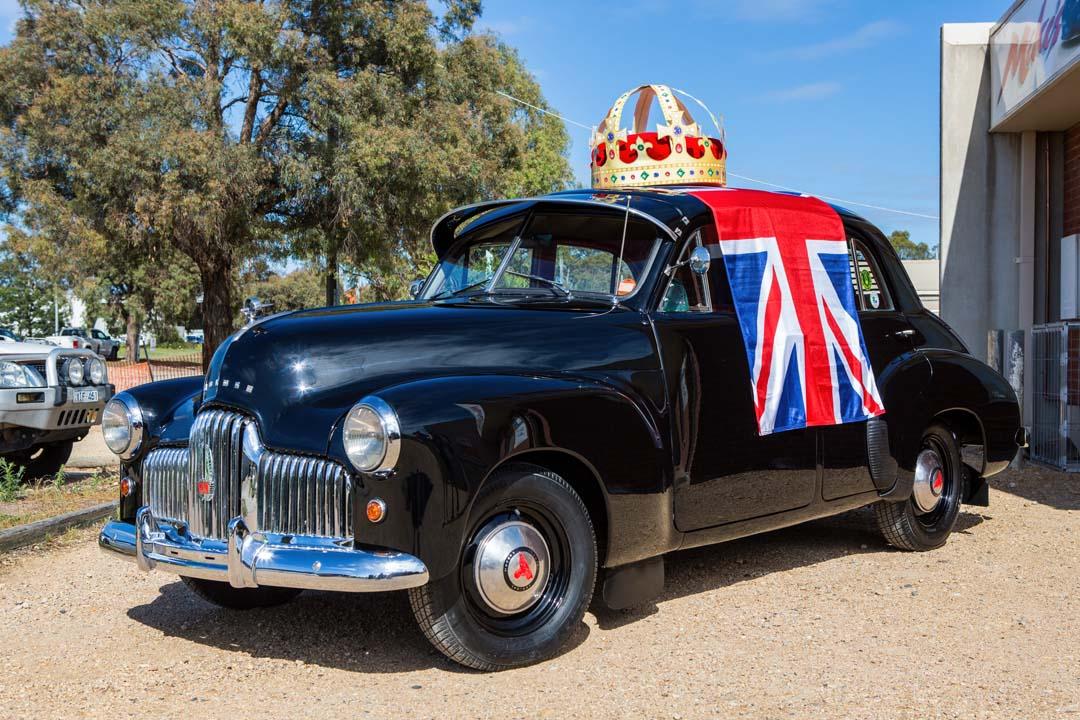 Twist of Fate
Any royal visit to this country makes the news (particularly if it’s Harry or William, it seems), but back in the 1950s, a Royal Tour was HUGE news – think ‘Beatlemania’ or ‘Bieber-fever’, but on a much bigger scale and not just limited to teenage girls!

While the Royal Tour planned for 1952 was cancelled, the one that eventually took its place in 1954 with Elizabeth (now Queen Elizabeth II) and the Duke of Edinburgh was massive, not just because of the popularity of the British royal family at the time, but also because it was the first visit by a reigning British monarch in Australia’s history. 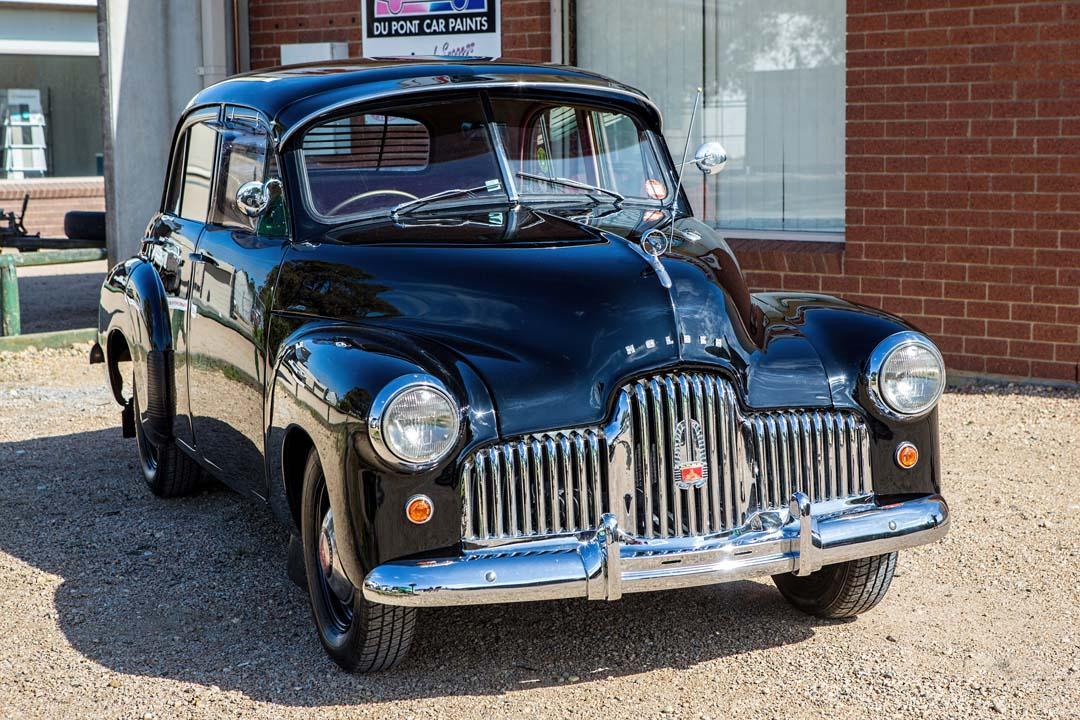 Leading the way were four Daimler DE landaulettes, which, like the sextet of Holden 48-215s, had originally been commissioned for a royal visit that never occurred.

These were supported by Humbers, Land Rovers and the new FJ Holden. 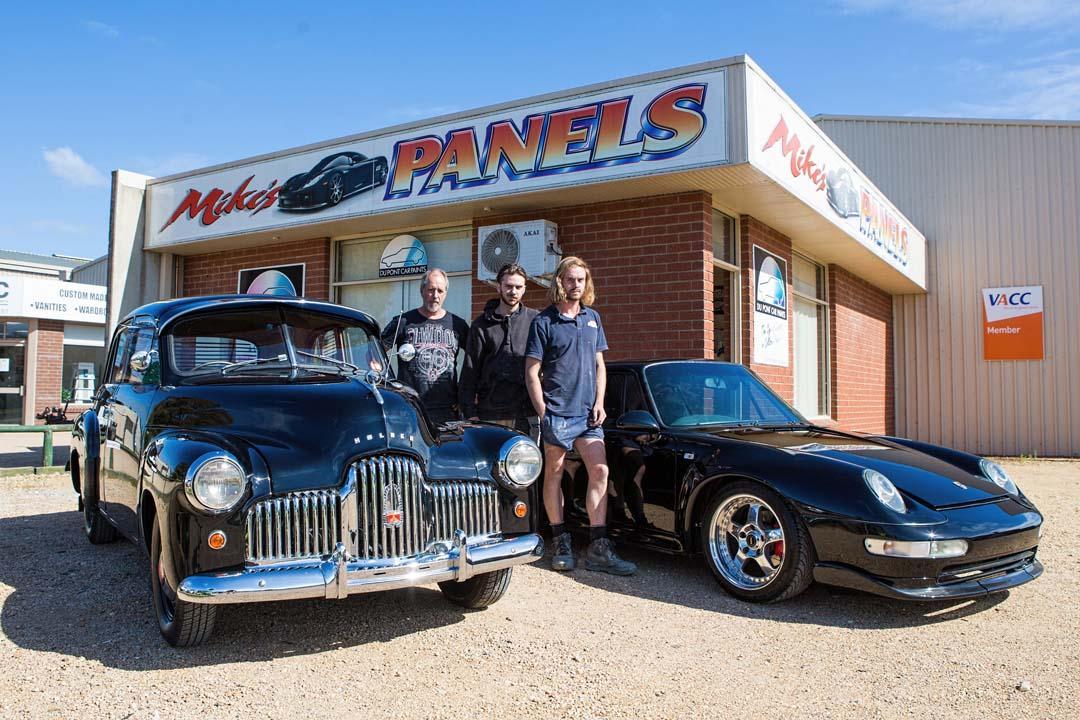 On top of all the travel by train, air and sea, that fleet of 55 vehicles was used on 207 separate trips with the Queen aboard and covered a combined 500,000 miles, maintained by a group of Army mechanics and technicians.

The tour itself took almost two months and visited 57 cities and towns across all states and territories (except the NT).

Criss-crossing the country in a feat akin to the torch relay before the 2000 Sydney Olympics, it’s alleged that almost 75 per cent of the Australian population at the time had the opportunity to see the royal couple on that ’54 tour. 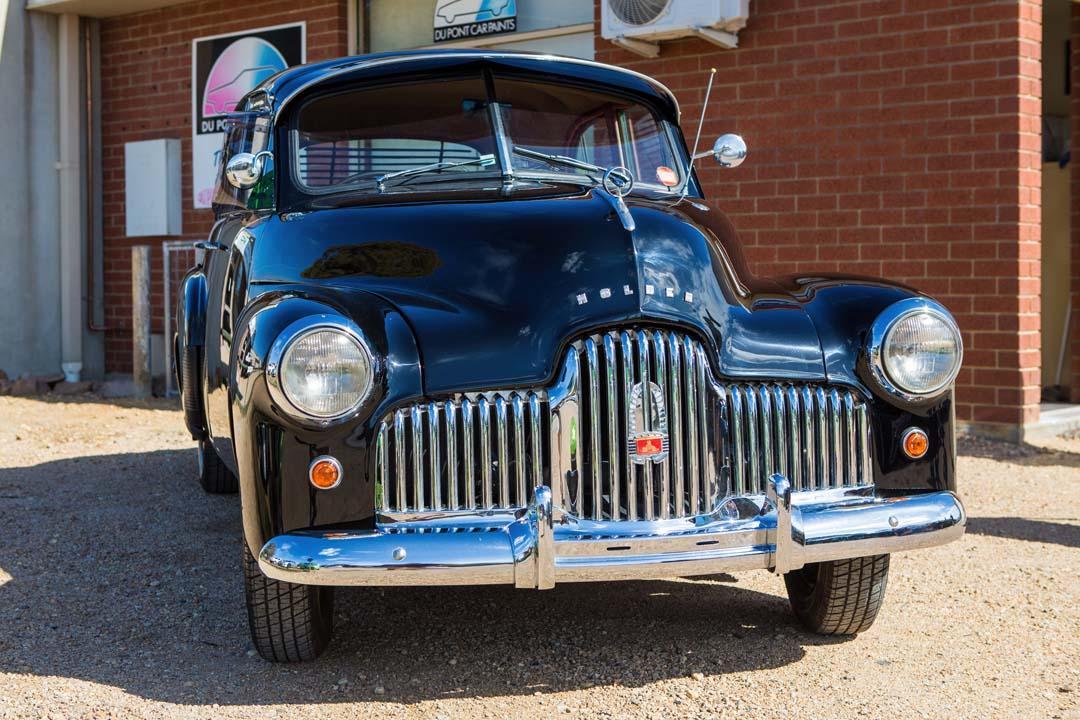 So, would a 1952 Royal Tour, when Elizabeth was still a princess, have attracted as much interest? Who knows.

What is known is that those 37 cars requested by the Commonwealth in late 1951 were never employed. The death of King George VI in February, 1952, led to the tour being cancelled before it reached Australia.

The extant Humbers and Daimlers went back to their respective government fleets, but the Holdens, which had been specially prepared for the tour - and provided to the Commonwealth free of charge by GM-H – would eventually be sold. 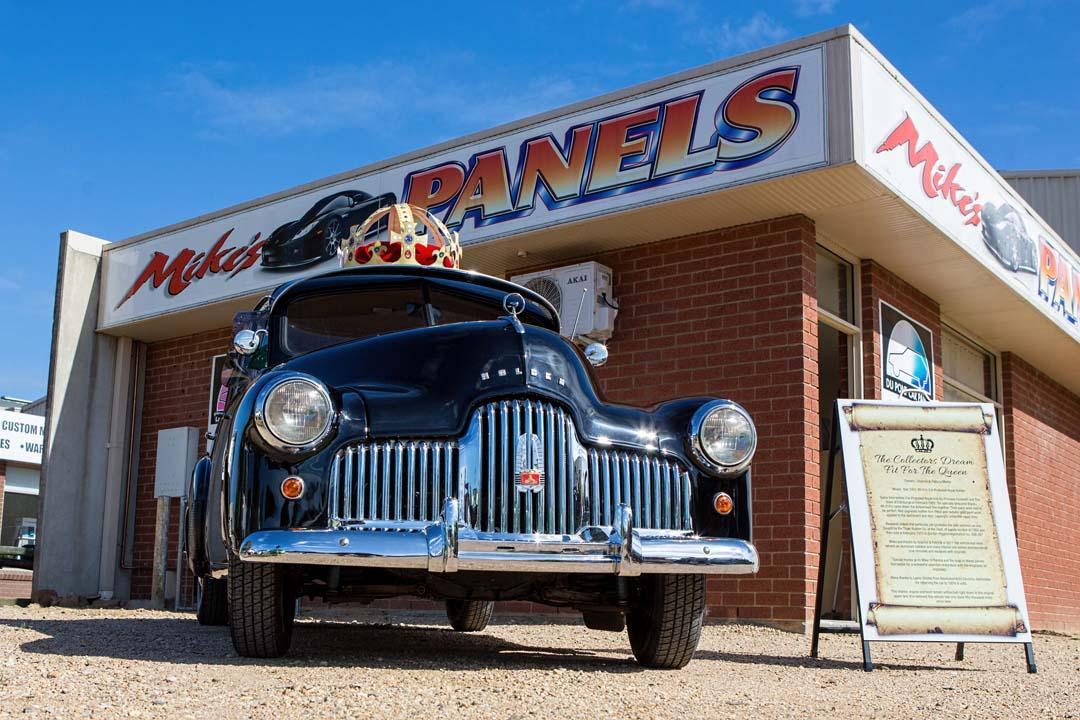 Special Treatment
While the ‘Special’ and ‘Standard’ Holdens are well known, these distinctions only came into effect with the FJ; during the lifespan of the Holden 48-215 (aka FX), only the Standard sedan was offered.

So, how do you make a Standard sedan “special”, especially if it’s potentially going to be occupied by a royal backside or two?

The answer, according to the recollections of a GM-H employee recounted to Don Loffler for his book, She’s a Beauty!, was to build them as well as possible, then lavish special attention on them as they went down the line. 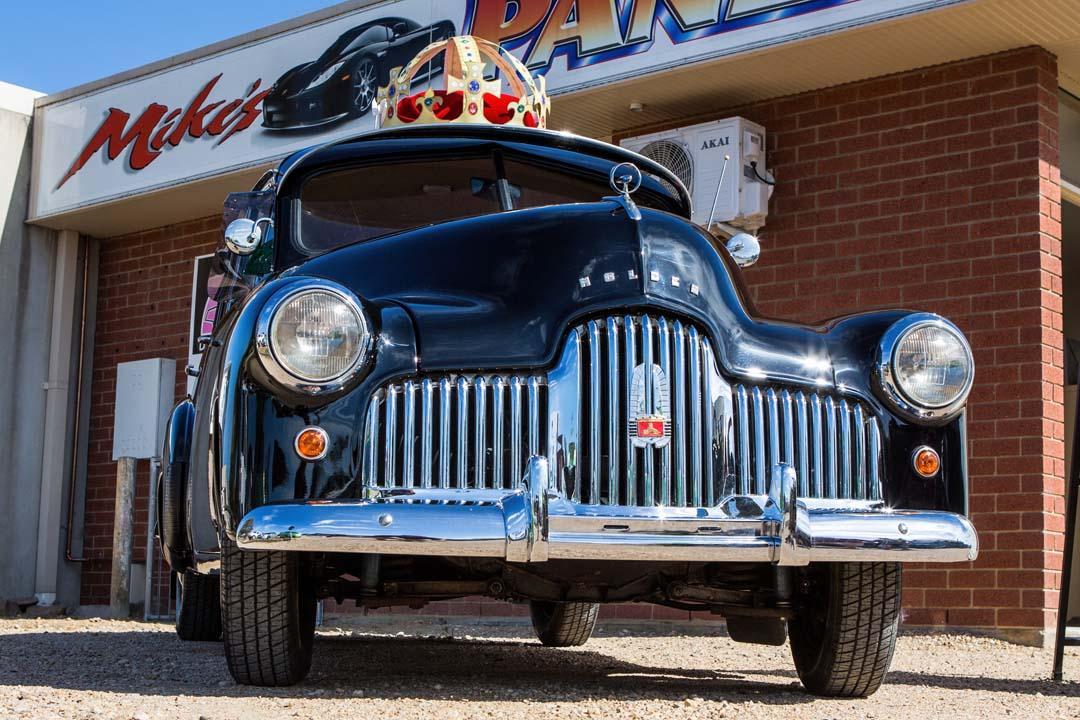 In this instance, that meant the GM-H assembly line at Birkenhead in South Australia.

As told to Loffler, the six cars came down the line with bodies finished in a black paint that was of noticeably better quality then the cars before and after.

Inside, all six featured ‘Lanyard Tan’ paint (a metallic gold colour) on the dash and door cappings, and red leather seat upholstery.

These were available, if uncommon, on the 48-215, but what was unique to the royal cars was custom-made red carpets of a quality equal to that of the paint.

Anecdotal evidence recounted to Loffler suggests that the tool bags for these cars also carried ‘Royal Tour’ identification, although this remains unproven. 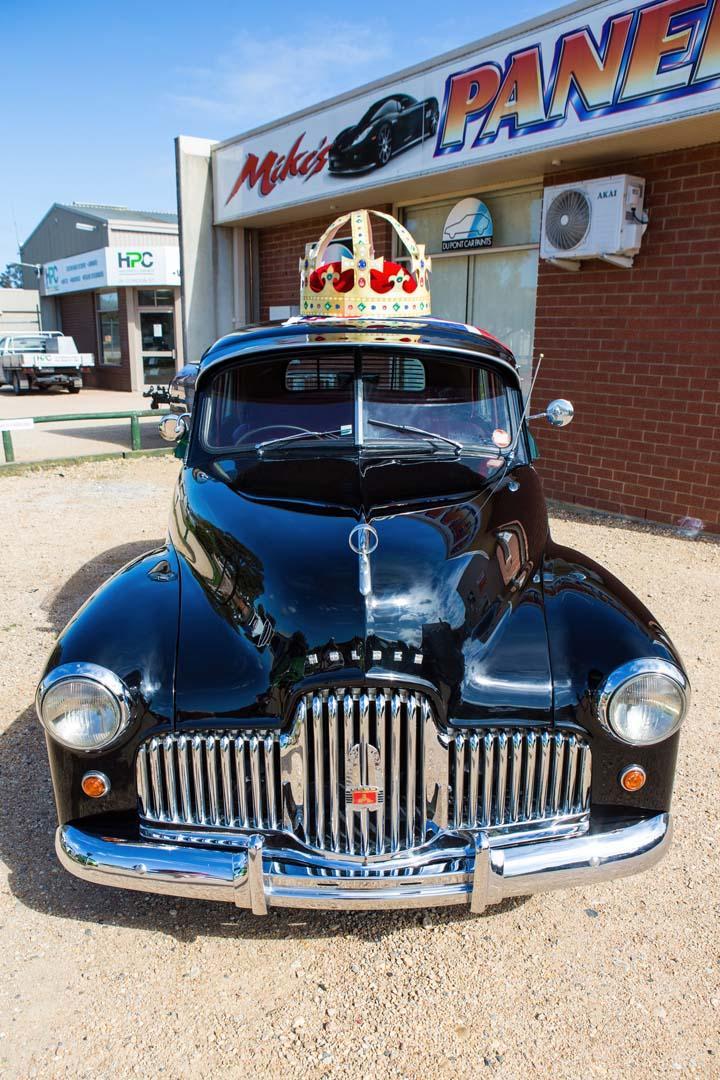 As each car reached final inspection, the engines were carefully tuned and any blemishes or faults remedied - these cars would be a showcase for Holden, so they had to perfect.

Exactly when these six special Holdens were built is unclear, but it’s likely they were finished shortly after Birkenhead celebrated the assembly of the 50,000th Australian-made Holden in November, 1951.

Found, Forgotten, Found Again
Following the death of George VI, it took some time before the proposed ’52 Royal Tour was officially cancelled, so the specially-prepared Holdens sat around for months before the word finally came down, after which they were disposed of at a government auction. 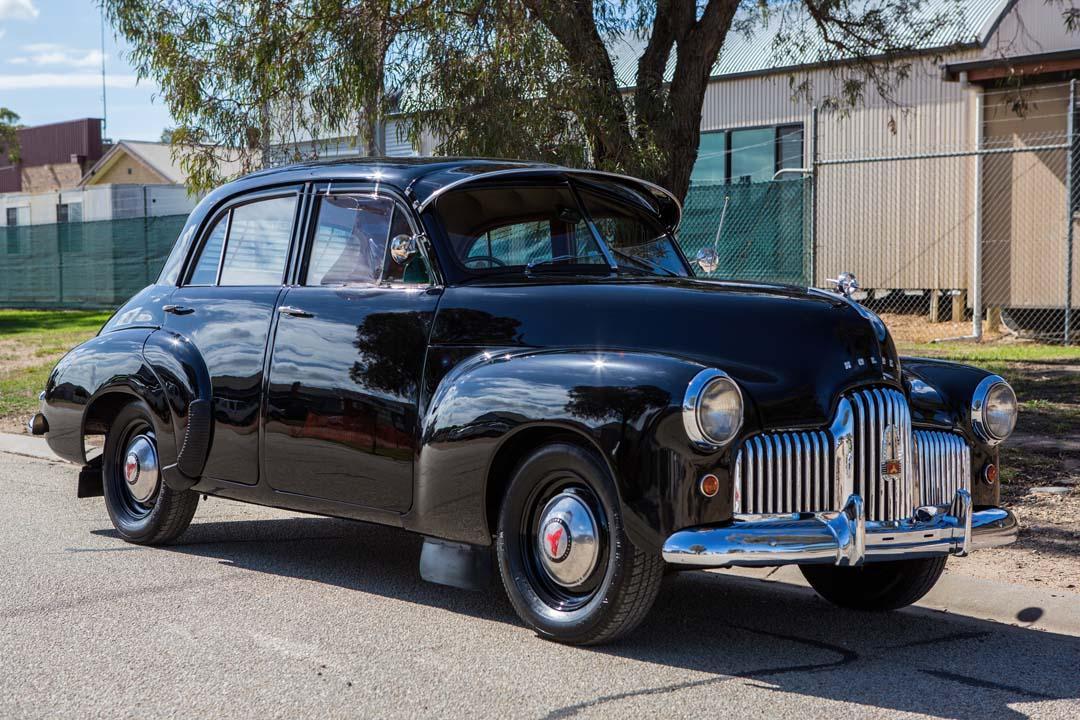 The lag between their preparation and eventual sale is evidenced by the fact that the car featured wasn’t registered until February, 1953.

That first registered owner was Gordon Higgins, who only had the car for three years, but added a number of NASCO accessories, like mudflaps, a sunvisor, bonnet emblem, weathershield and exterior mirror, during his ownership.

Many years later, as recounted in She’s a Beauty!, Higgins stumbled across what looked like his car.

The owner told him the Holden had been repainted and the original red carpets swapped for gold-toned replacements.

This left Higgins in some doubt, but checking the ID and registration records proved that the car was previously his. 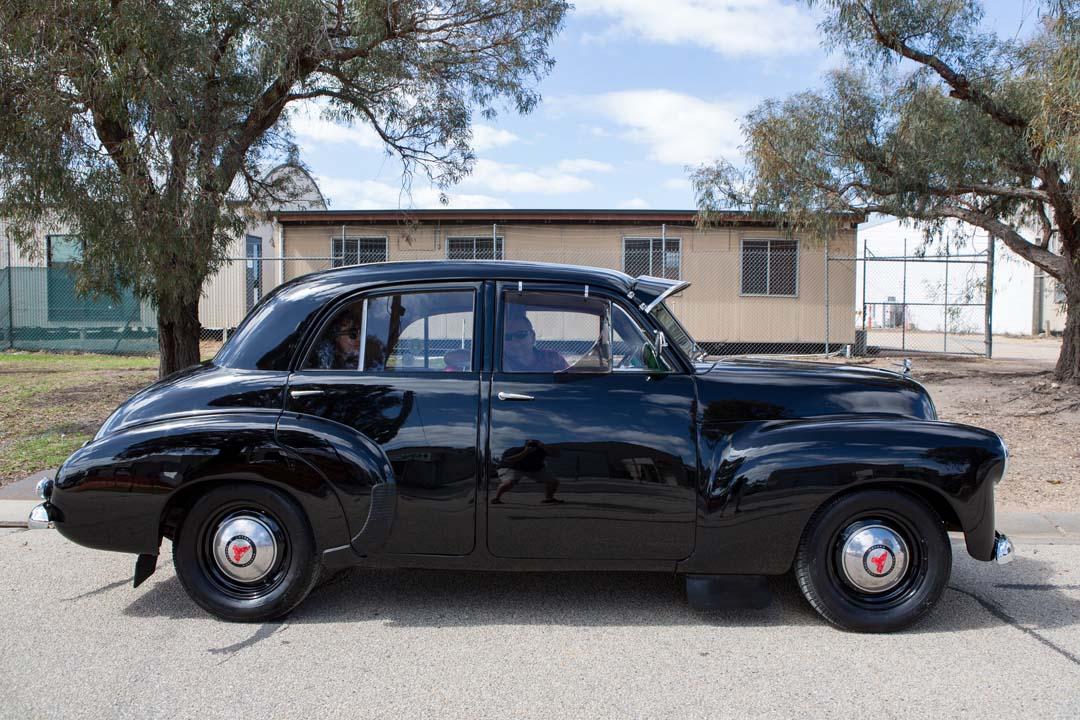 The Higgins car was one of three out of the original six ‘Royal Holdens’ of 1952 that Loffler managed to track down early provenance for, but on all bar this car, the trail goes cold after the initial purchasers.

In 1997, this car came into the possession of Tony Gall in NSW, who pampered it for the next twenty years before deciding to sell it in late 2017.

Advertised in JUST CARS, with the teaser of “interesting history” in its description, it came to the attention of Graeme Martin.

Being an old Holden buff from way back, with a restored FJ amongst his past cars, Graeme liked the striking black 48-215 immediately, but it was that “interesting history” – later found to be the royal connection - that piqued his interest enough to buy it. 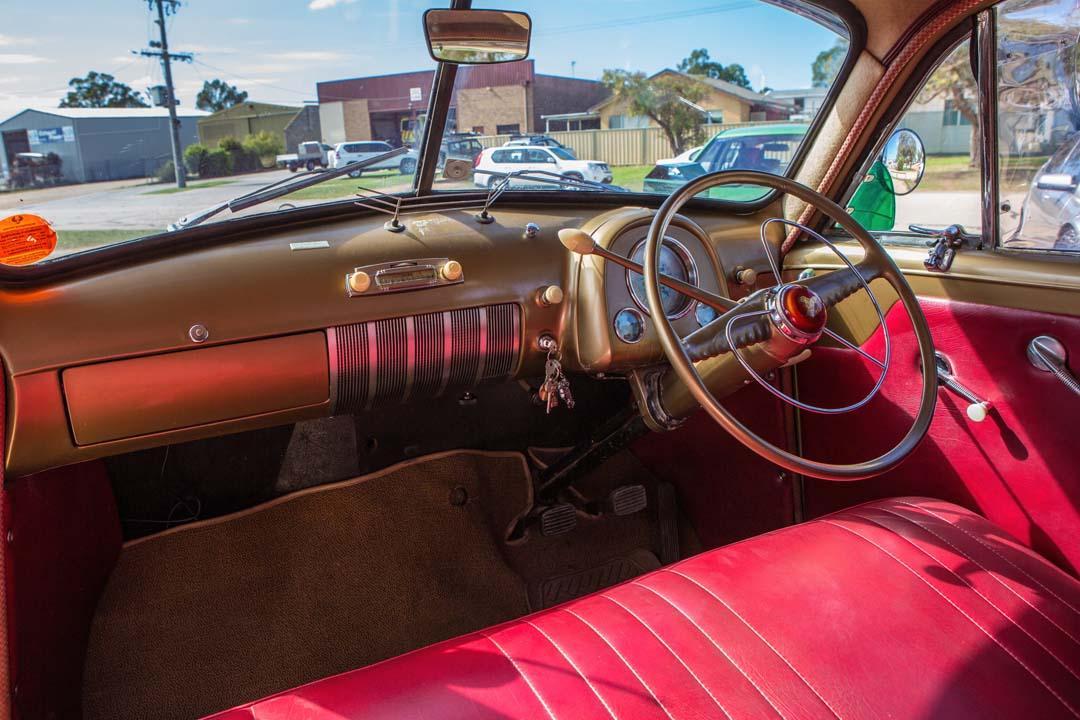 Back to Basics
The car came to Graeme with less than 51,000 miles on the odometer, but had acquired some non-authentic features along the way, like a modern aluminium radiator, electric wipers, stainless steel brake lines, 12-volt electrics and wider wheels with radial tyres.

However, the original wheels and radiator were supplied with the car.

After reading up on the car’s history in Don Loffler’s books, and sourcing additional information through FX-FJ historian Barry Black, Graeme decided to restore the car to as close to its original condition as possible.

That meant all those non-original parts would have to go, but before he decided just how far he would go with the resto, he called on an old associate. 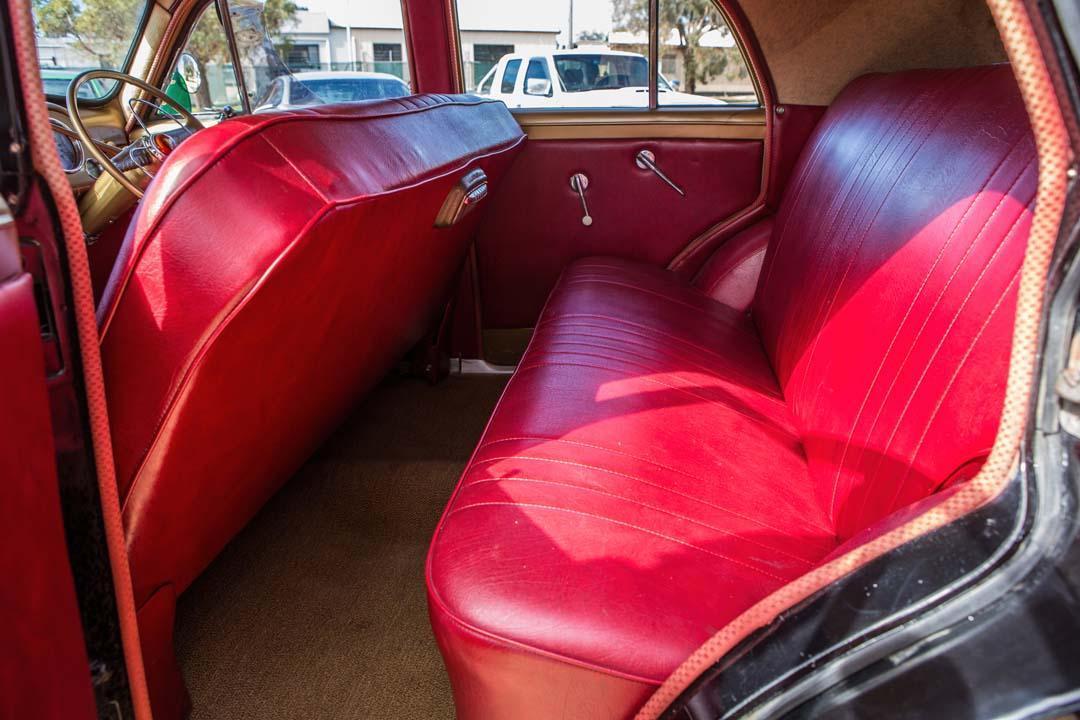 “I had advice from Brendon Bourke, now retired, but formerly of Phil Munday’s panel shop in Kilsyth,” Graeme explained. “He decided that we should leave the interior as is, likewise the engine bay and boot, which amazingly, still included the original spare tyre!”

Brendon had previously been involved in the restoration of two FJ Holdens of Graeme’s, as well as an MG and ’39 Packard in the Victorian’s quirky car collection.

So, authentic tyres to match the original wheels were found, the original radiator put back in place and 6-volt electrics fitted, while a complete new exhaust system was required for the car to meet roadworthy requirements.

The vacuum operation for the wipers has yet to be reconnected. 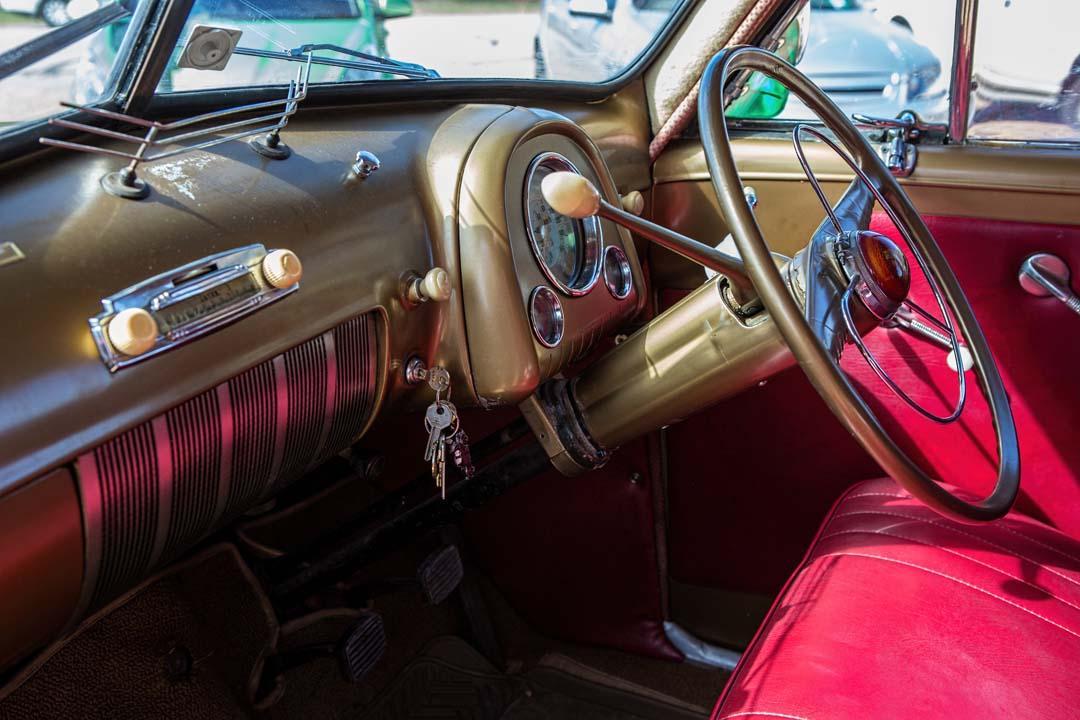 In terms of the car’s paint, it wasn’t bad, having been subject to at least one respray in its past, but Graeme was aiming to replicate the high-quality finish originally done back in 1951, so Mike DiPalma and his team at Mike’s Panels in Bairnsdale were tasked with carefully repainting the car as close as possible to the “original superior production finish”.

After three months’ work on the repaint, Graeme was very happy with the result: “The whole car now presents as it was first delivered back in 1952.” 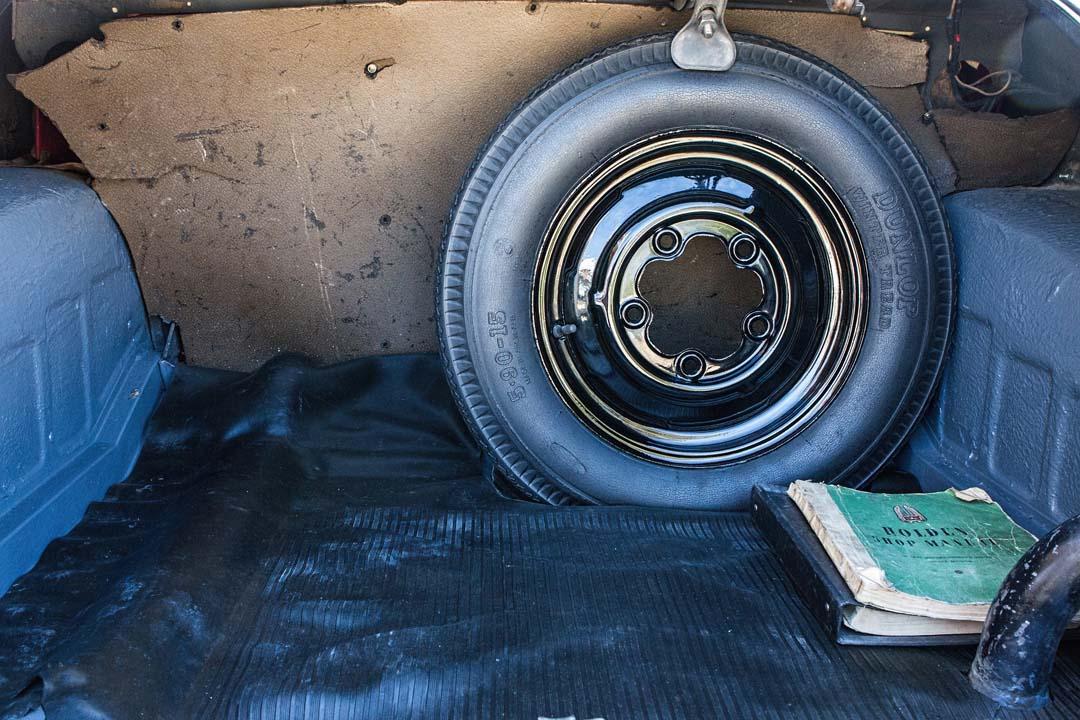 Postscript
While Graeme has a great appreciation for his ‘Royal Holden’ and its history, especially given his belief that this is the only survivor of the six built, he feels he may not be the best custodian for it.

As such, his plans for this car have changed.

“It’s almost too good to drive now,” Graeme chuckled. “So I would like to see it go to someone with an equally great appreciation of the car and its significance – really, it’s better off being part of a museum or private collection.”

At time of writing, the car carried a guiding range of $35,000 to $45,000. Further details should be online at: shannons.com.au/auctions/upcoming/ by the time you read this.

Here’s hoping a new owner comes along to keep the “tour” of this Holden going. 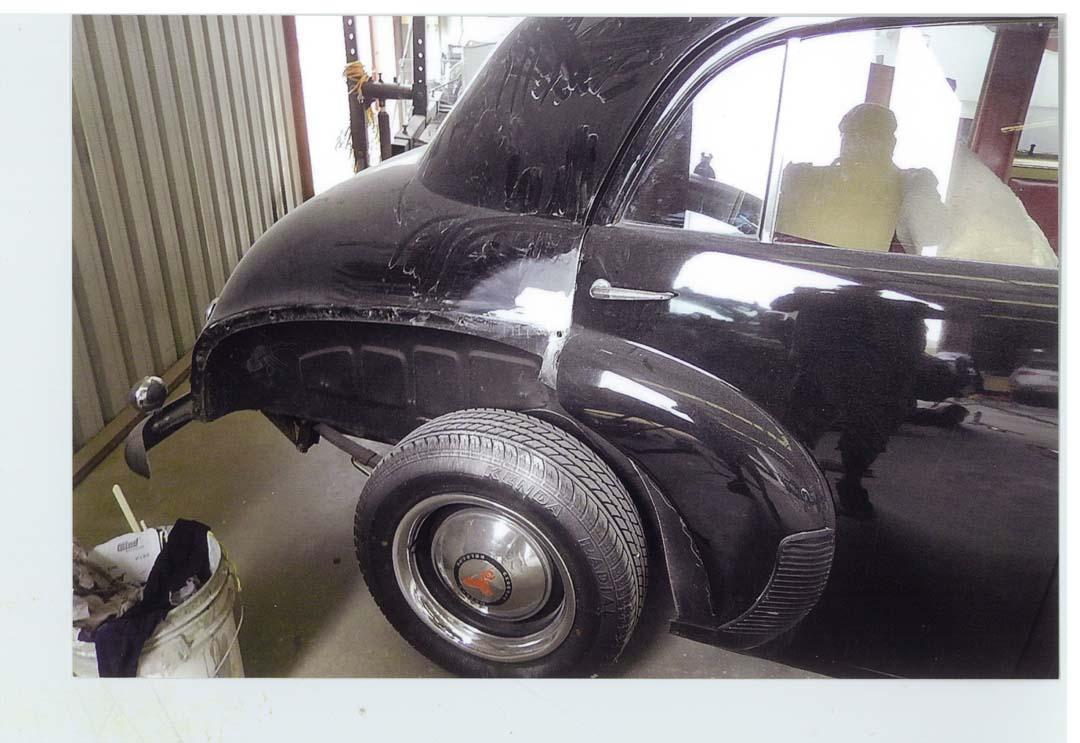 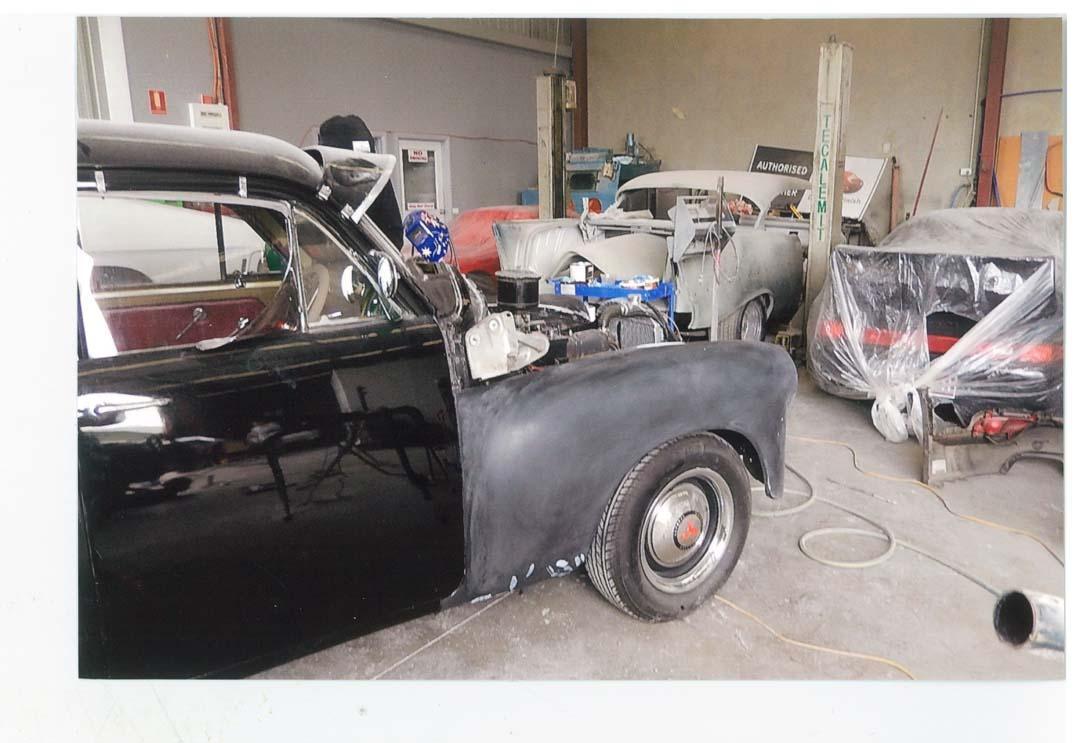 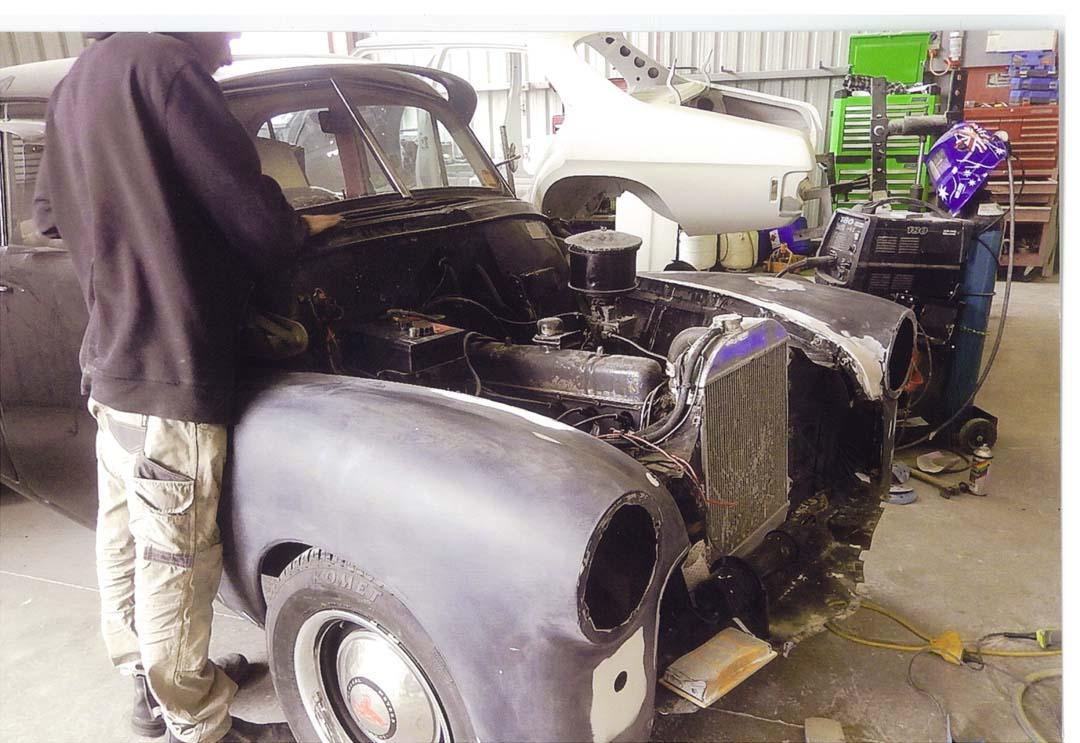