A genuine piece of Australian custom car history, this FJ has been brought back to life by a dedicated enthusiast.

History can be as much about luck and circumstance as anything else. Dig back into history’s major turning points and the “what if” scenarios can be intriguing. Significant moments on a more personal level may be less grand but are no less intriguing.

Take the car featured. If circumstances had been different, if the current custodian had taken another path in one of those ‘sliding door’ moments, what you’re looking at may never have come to be and this car may have become history. 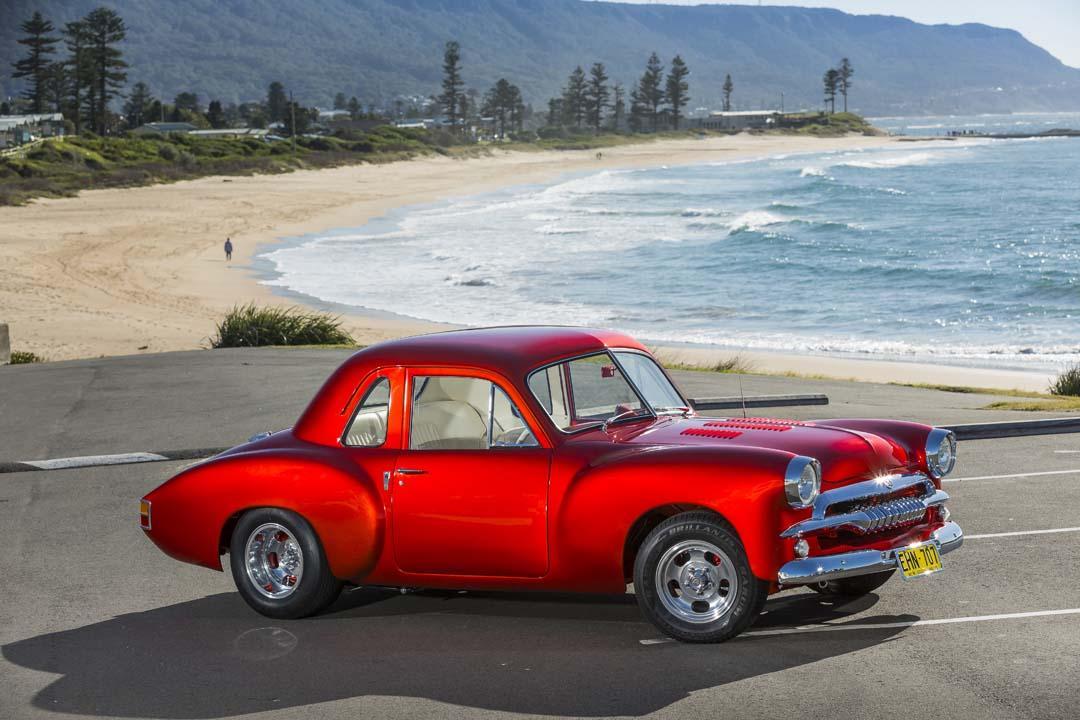 This car, as many readers would know, is the Lance Simmers FJ, better known as the ‘Draggin Coupe’. One of a handful built in the 1960s when the Aussie hot rodding and custom car industry was starting to take off, this car dropped off the radar in the 1970s and was thought to be lost forever, but one of those ‘sliding door’ moments happened – and thank god it did!

Finding the Draggin
John Trunzo from Wollongong is a Holden man, but like many Holden men, he has a particular passion. In this case, it’s EHs. John has owned and built several over the years, including a very tidy EH street machine that’s in his current collection. 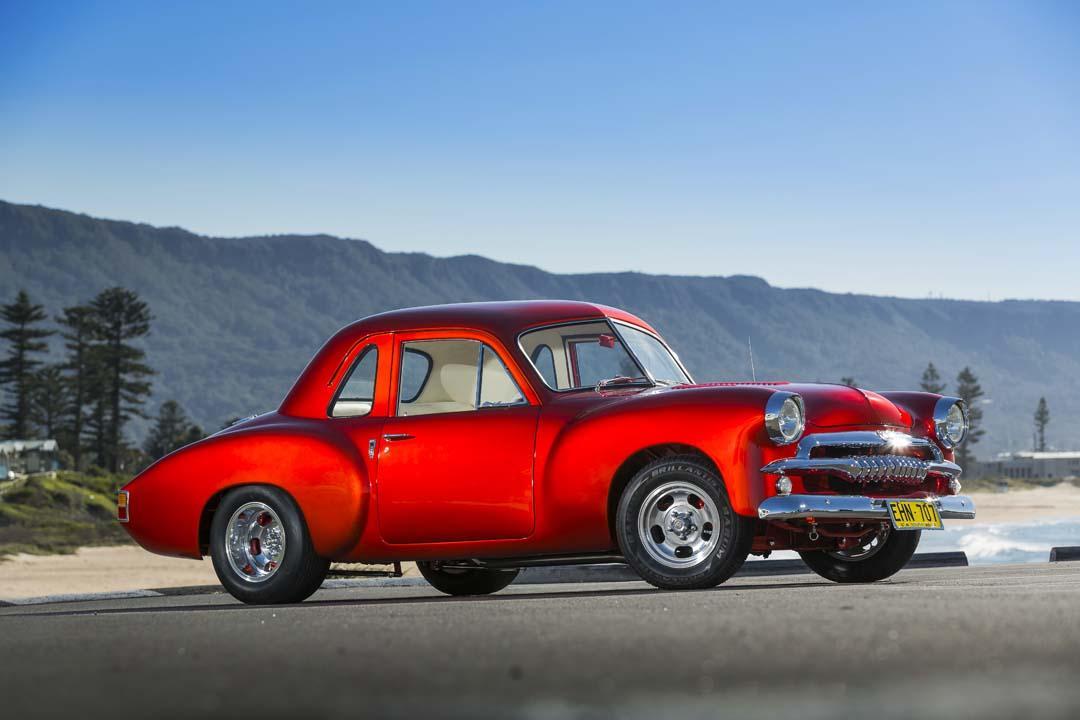 In one of those ‘sliding door’ moments, John was visiting a local business back in 2008 when he was asked by the owner if he was interested in an “old car”. Having seen the sharp finish and attention to detail on John’s EH, the business owner thought John may be able to do it justice.

“I predominantly do up old EHs and FCs,” John explained. “But I was looking for something new to do.”

Being located nearby, John figured it couldn’t hurt to check it out. Just as well he did!

“I checked the car out and didn’t know what the hell it was!” John laughed. “It just looked interesting to me at the time, so we worked out a price and I bought it.” 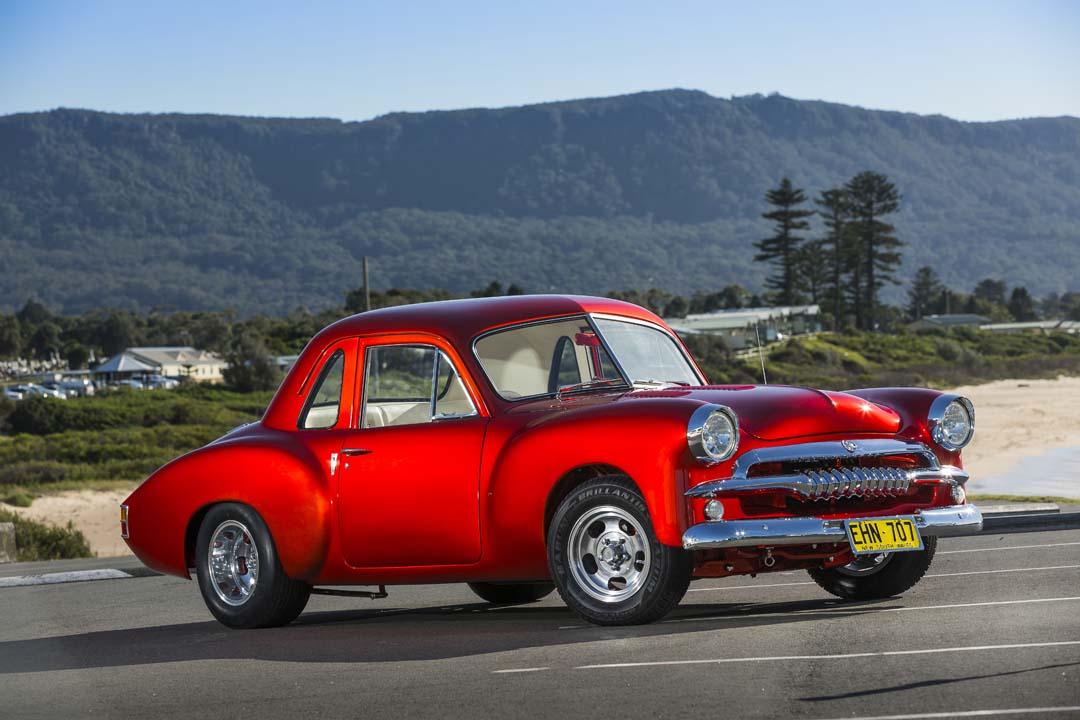 The shortened and sectioned FJ was in bits and had been stripped, media-blasted and painted in a flat blue when John was introduced to it. It was intriguing, but was a bit of a basket case.

The first inkling John got that his new purchase was more than just an “old car” came when it was being towed to his garage.
“The towie said ‘I’ll give you three times what you paid for it’,” John recalled. Days later, a conversation with the brother of Peter Brackenridge, a mate of Lance Simmers, uncovered more details.

When told his new purchase may be the long-lost Lance Simmers ‘Draggin Coupe’, the name meant nothing to John, but thanks to the internet, he soon knew about both the car and its owner. 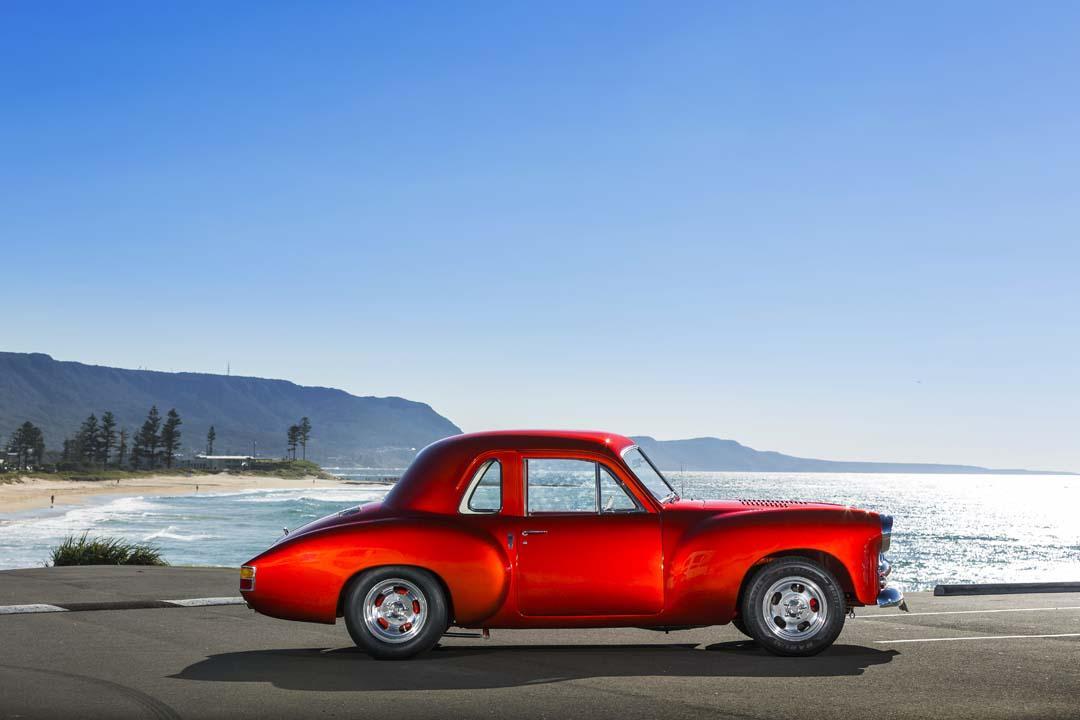 Using an old-school telephone book search, John and his partner Liane eventually located Lance, who was living in Queensland. Lance had parted with the car in 1973 and was extremely sceptical that John had his FJ. “He said ‘Nah, you’re dreamin’. We haven’t seen that car for over forty years’, so I left it at that.”

Confirming the Draggin
Street Machine magazine, who had been asking about the Draggin Coupe’s whereabouts at around the time John bought it, checked out the car and ran an article on it, which got back to Lance.

He was intrigued enough to come down to Wollongong a few months later and check out the car personally, but even he wasn’t sure this was the genuine Draggin until he gave it a closer look: “Lance remembers distinctly that he’d cut the hole too large for the frenched aerial and had to put an extra plate in behind it – that was his signature. 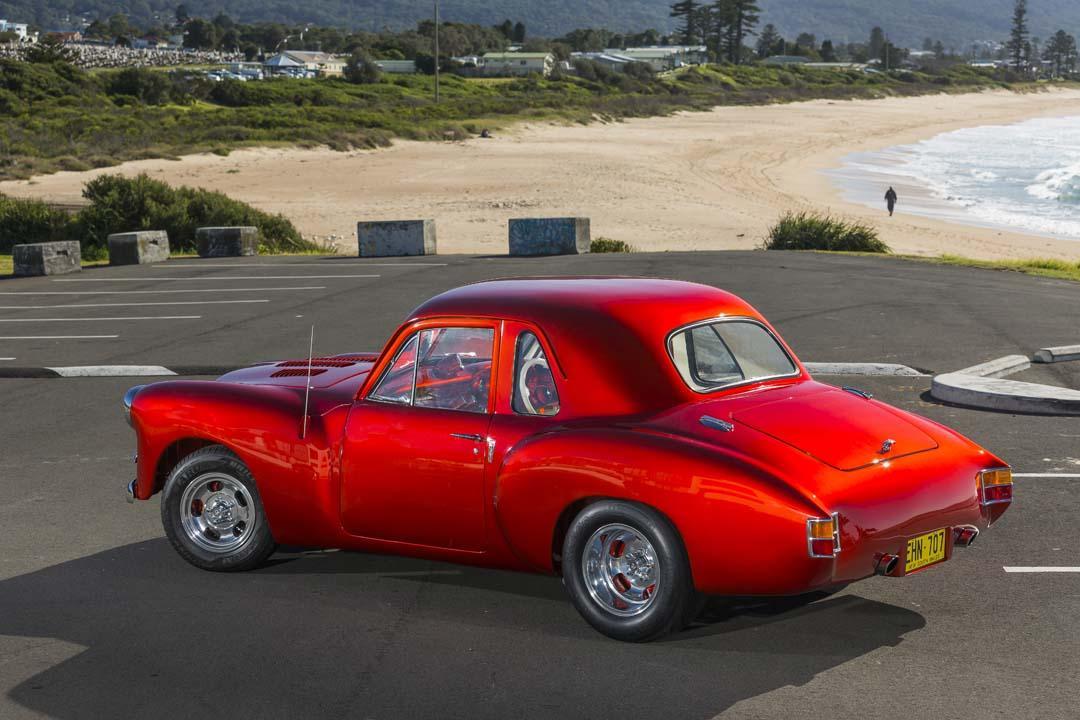 That kicked-started not only a great friendship with Lance, but also a commitment from John to restore the car in time for the FX FJ Nationals in 2012, with Lance as his guest.
“A friend of mine, Warren Haynes, and I set out to restore it,” John said.

But “restore” is really too simple a word to describe just how much has gone into this car, in terms of both time and money. 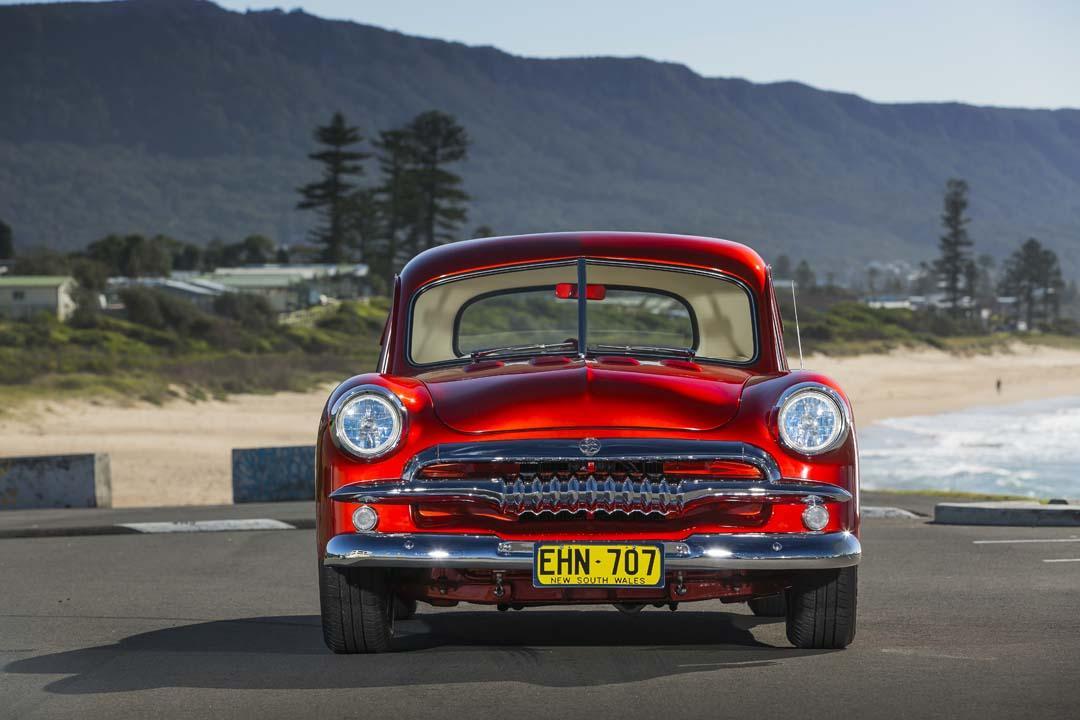 Colour Attraction
Through his new association with Lance, John found out that the car had actually been painted dark blue in its first iteration, but like many show cars of the era, it went through a number of changes.

Lance recalled that the car simply wasn’t attracting trophies in that hue, but when he repainted it in a bright Alfa Romeo mustard yellow, that all changed – he started cleaning up in the ‘radical custom’ class at just about every show he took it to. 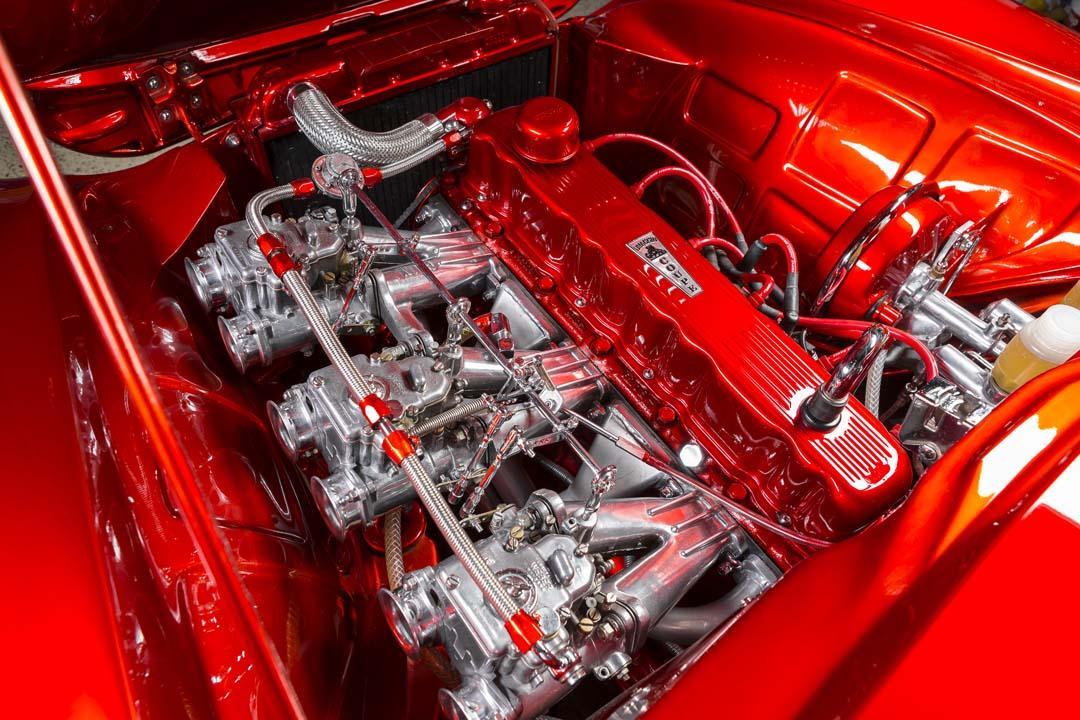 To backtrack a little here, while Lance did complete build of the car, show it and drag race it back in the 1960s, he didn’t do the initial chopping and sectioning; that was done by Ian Bradley. Lance’s car was apparently one of four that Bradley had executed on old FJs. John’s been able to track down one of the others, also located in NSW, but that owner is unwilling to part with it.

The colour that the car wears today, a Candy Burnt Orange, is John’s own choice and had been created years before he even got hold of the Draggin.
But before he got to painting, John had to tackle a hell of a lot of bodywork. 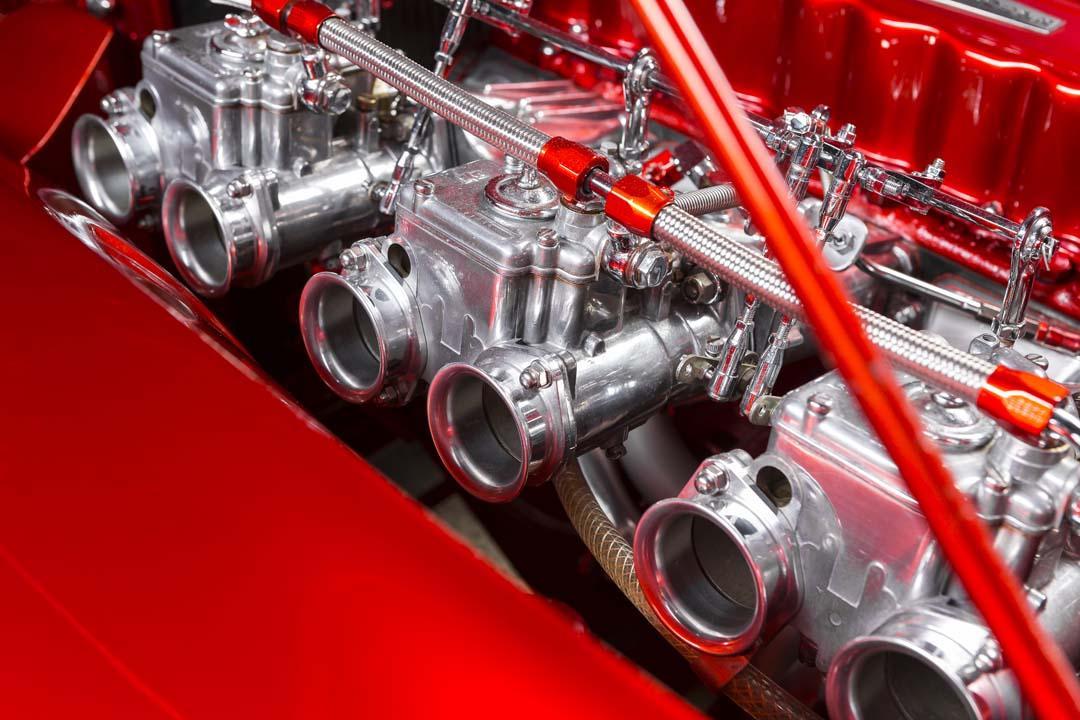 Saved by Paper
After a number of years on the show scene and in action on dragstrips throughout the country, the impracticalities of a compact coupe as a family car became apparent, so Lance swapped the Draggin Coupe for a new Ford Fairlane in 1973.

The story takes a bit of a weird turn here, with Draggin ‘s next owner adding a “face” to the car and turning it into ‘Bumper the Talking Car’. 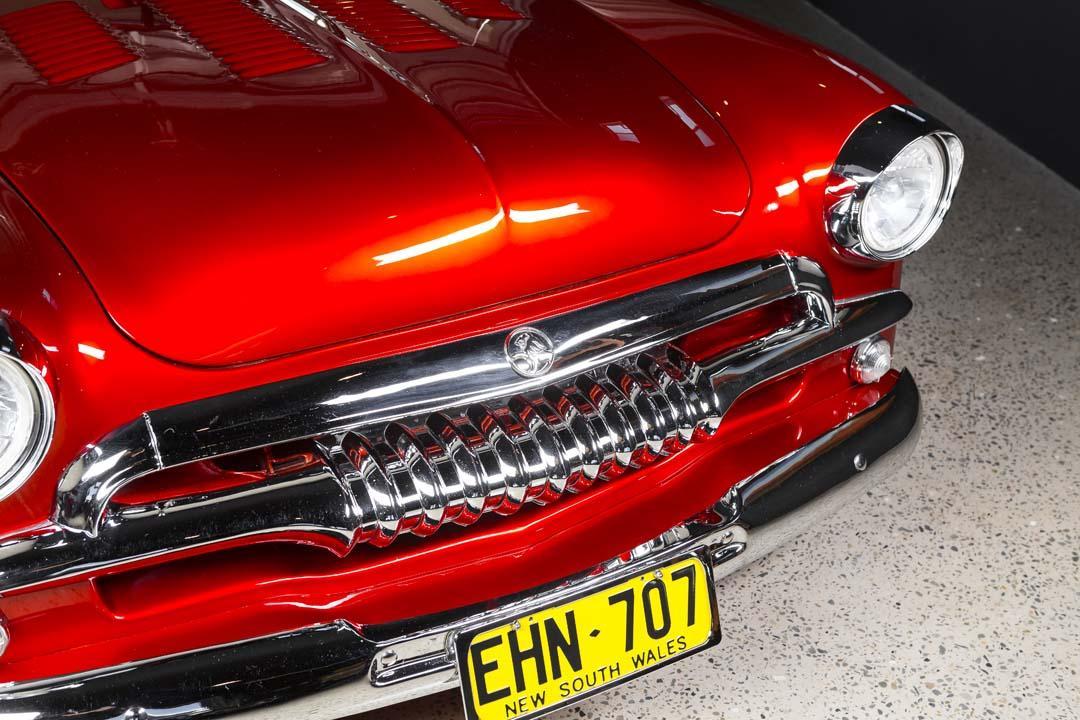 With lever-operated ‘lips’ at the grille, ‘eyes’ and ‘eyelashes’ on the windscreen and ‘ears’ on the doors, the car was taken around schools in NSW to teach kids about road safety.

Some have regarded that conversion as sacrilege on such a significant car, but John disagrees and is adamant that Draggin’ Coupe’s ‘Bumper’ era was key to the car’s survival.

“Everything on Bumper was papier mache, so the vehicle had to be kept in the garage at all times – it couldn’t get wet,” John explained.

Without the necessity to keep it undercover, John believes the car would have been left outside, like so many other cars from its day, and rusted away. 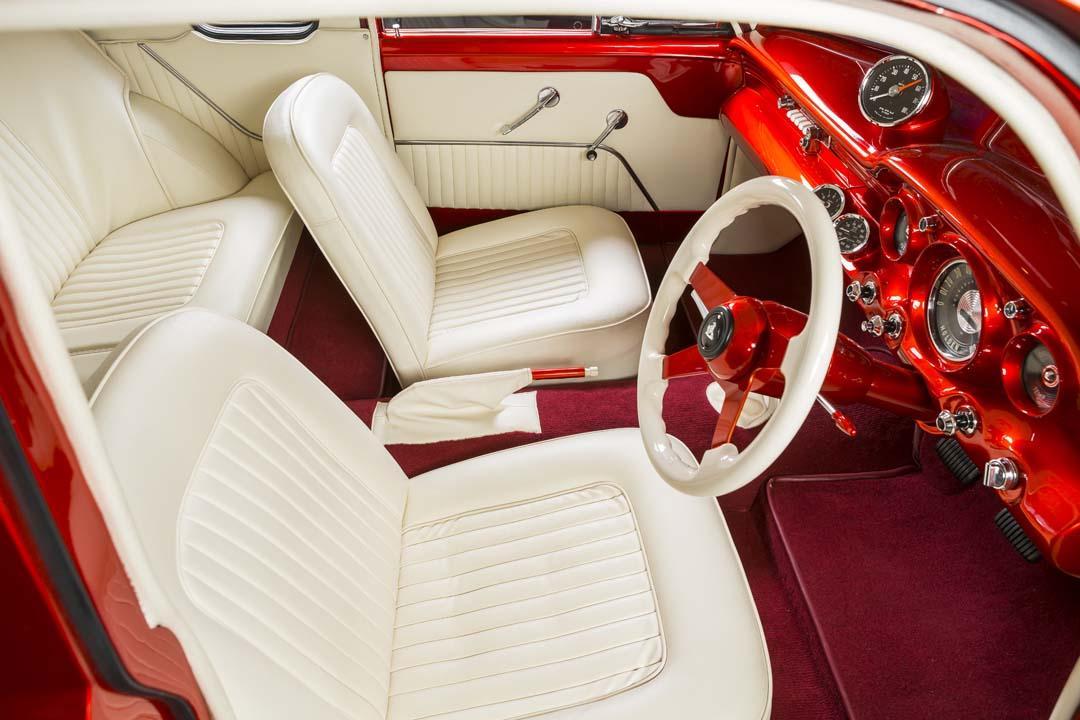 Body Building
Despite those many years undercover, the Draggin Coupe proved to be in less than great shape when John started the restoration.

Work had been started on the body when John got it, and while there was virtually no rust, the condition of the metal and things like the panel gaps and the amount of brazing in the body meant it simply wasn’t up to the standard John wanted and thought the car deserved. 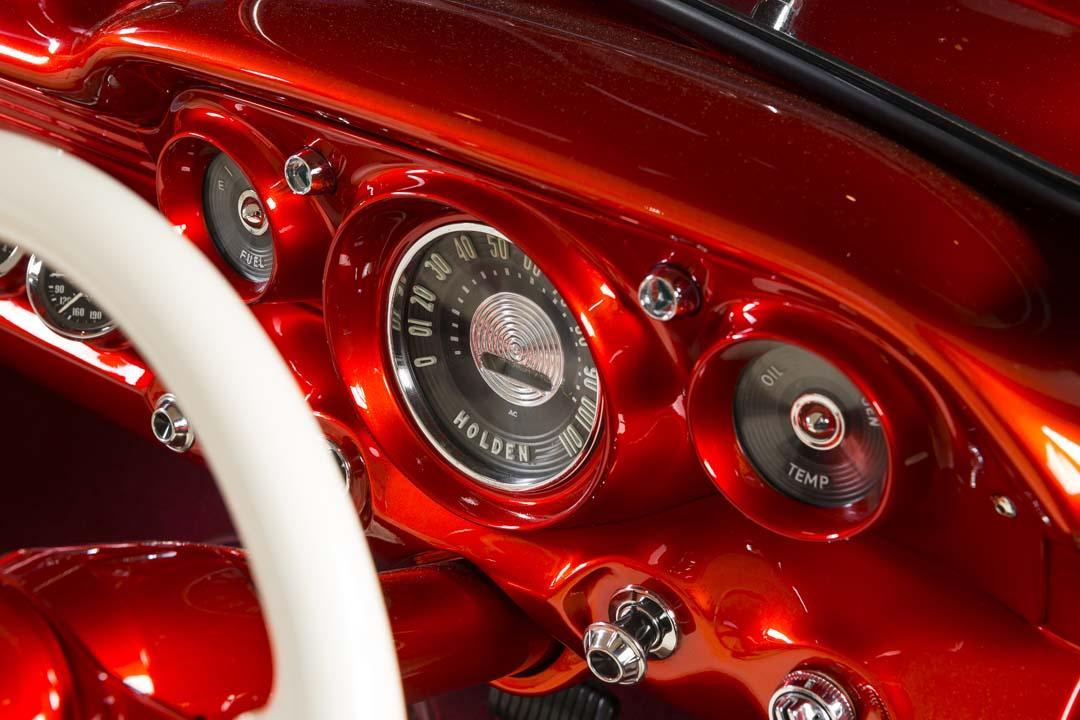 “Warren and I spent a lot of time on the door gaps and lining everything up,” John explained. “We also took the whole floorpan out of it, because it was really a mess underneath. It had been made out of really thin gauge steel and everything was warped and buckled.”

Remaking the floor out of 2mm plate steel was tricky, as there’s a 50mm drop in the floorpan that had to be worked in to the pressings and then welded in. 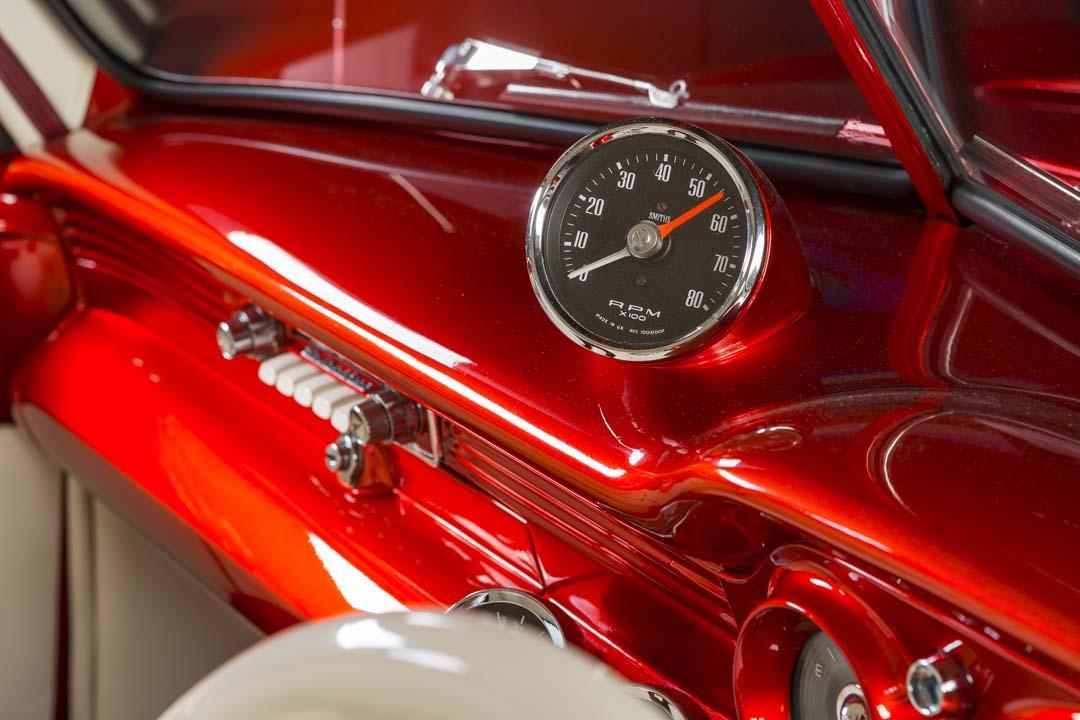 “We must have spent 18 months just on the undercarriage,” John recalled. But thanks to Warren and another mate skilled in metal fabrication, the car was redone to a standard much better than how it had been done originally.

“The body took a huge amount of work to bring it back to life,” John said, but he never considered abandoning the project.

During this process, John made a few little mods of his own, like running the exhaust tips through the roll pan instead of under it and making a dedicated recess for the rear numberplate. To get it road legal, the internal fuel filler was replaced with two external filler caps from a Jaguar. 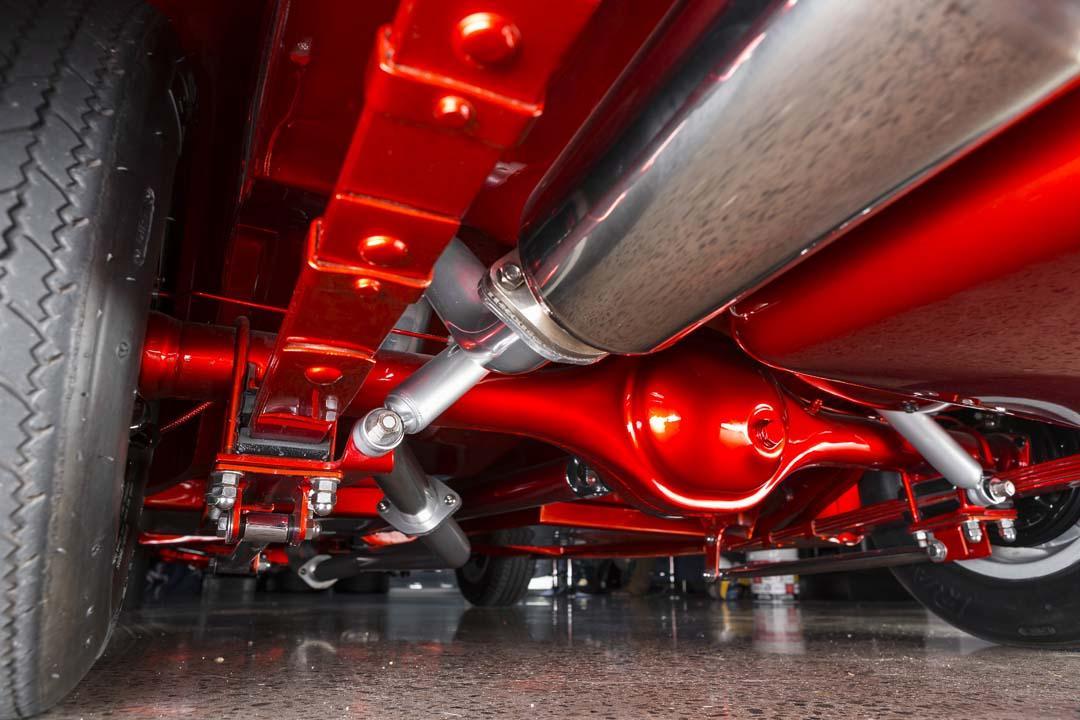 The Candy Burnt Orange paint that’s John’s own mix from way back was laid down by Warren over a silver base that gives it a bit more ‘pop’ and really works on a car with curves like this.

It’s also been applied to the engine, which is the original 186-bored-to-192 that Lance built. Original engine features include 12 port heads, a 40/80 cam, a Cain inlet manifold and extractors, but John has replaced the SU carbs with 45mm Webers. 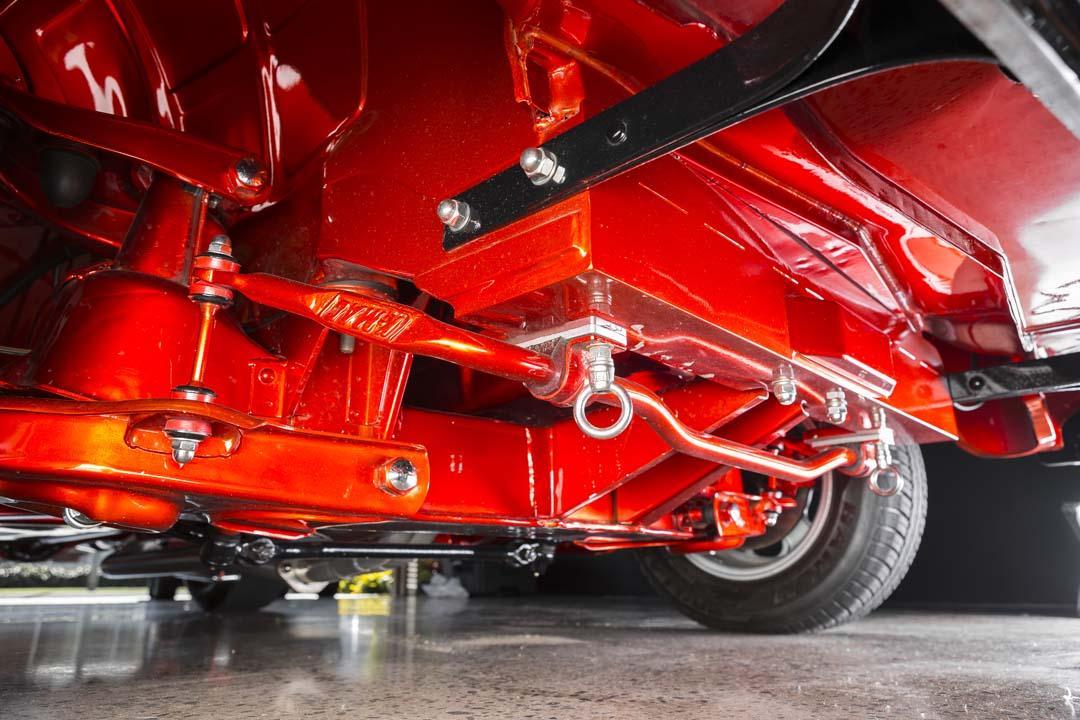 John got the original wheels when he bought the car, but has added his own Mawer rims, which he occasionally swaps out for the retro-look US Racers alloys seen in the photos.

A final exterior touch that looks circa 1960s, but is actually John’s addition, too, in the badging.

The ‘Draggin Coupe’ badges aft of each door and on the rocker cover look great, but serve a more practical purpose: “They stop people second guessing if this is the actual Draggin Coupe!” John laughed. 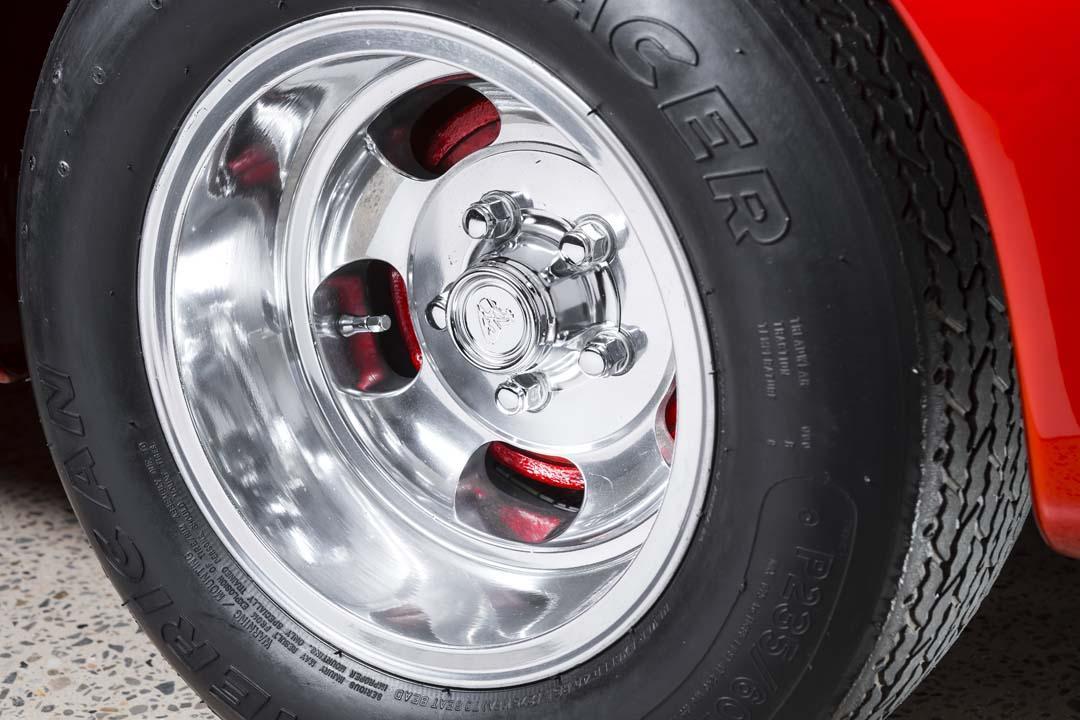 The White Touch
Inside, some more of John’s own touches included bespoke housings for the tacho and additional gauges that were made up from mandrel-bent exhaust pipe of the appropriate diameter and welded into the dash.

The C1960s custom door cards and other interior trimming that came with the car were a white and brown button style. 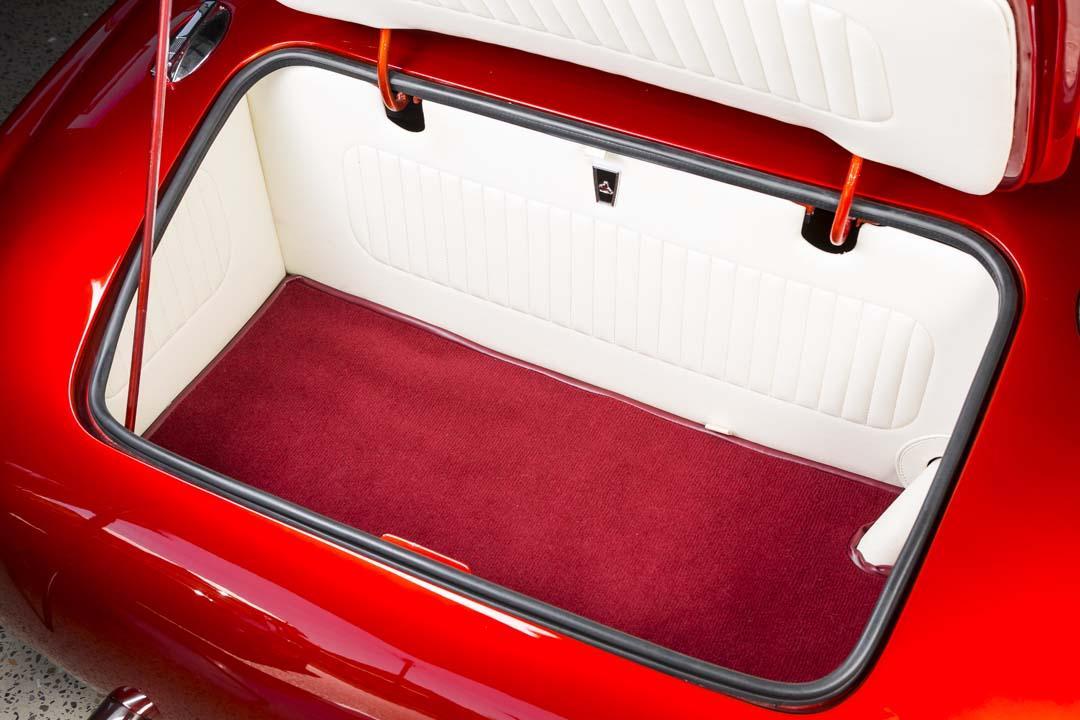 John said they were OK, but wouldn’t really work with the paint he had chosen, especially as that hue graces much of the interior, too. Instead, a heavy-duty, bone-coloured vinyl was selected for the seats, door cards and shifter boots.

“Doing the build, I was conscious of the monetary side of it, but trimmer Peter Quinlan suggested this really good quality vinyl, which looks like leather.”
Complementing this is the Coral Red carpet, which also lines the boot floor, and a SAAS steering wheel that allows for a bit more legroom in what’s a fairly cramped cabin. 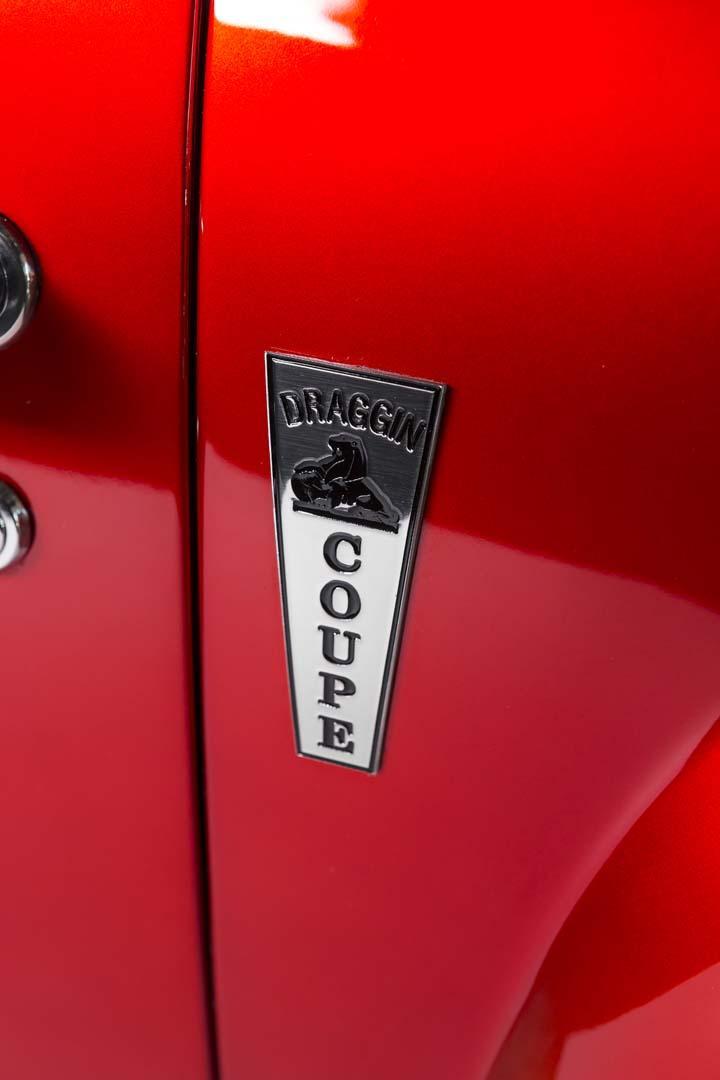 Bathurst Debut
Completed in time for the 2012 FX FJ Nationals at Bathurst – just! – the Draggin Coupe made an impression on those who thought the car was long gone, and provided a surprise for many who thought Lance was long gone, too.

“All these elderly guys were coming up and saying ‘We remember this car! I suppose Lance has passed away?’ And I’d say ‘No, there he is sitting there!” John laughed. 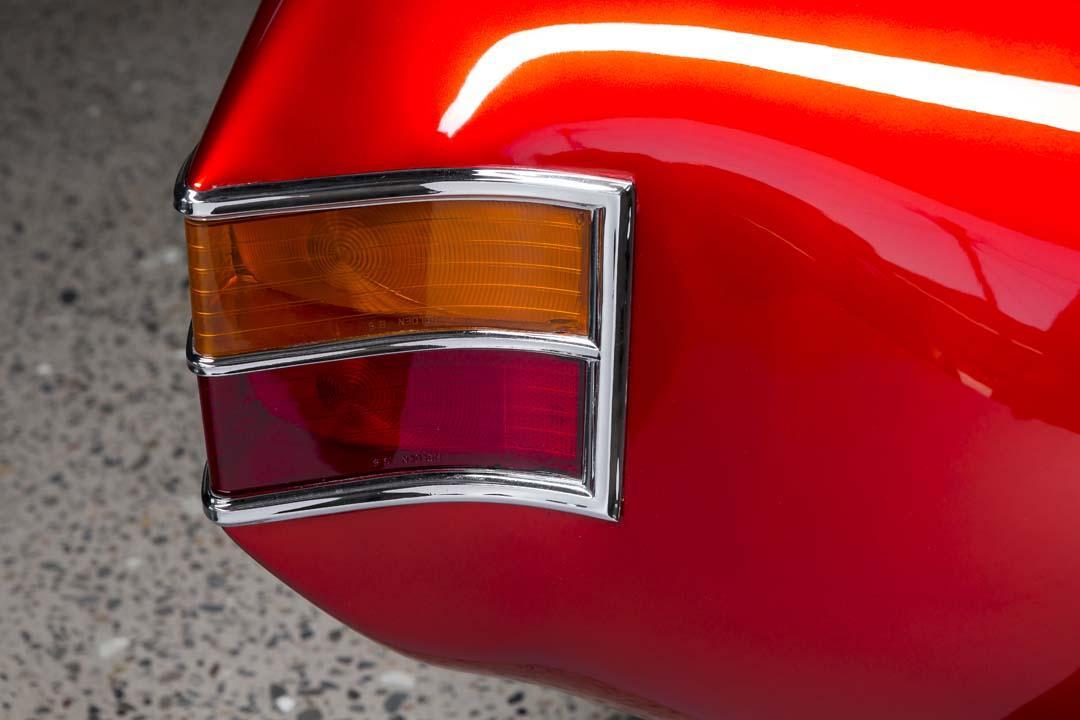 Stories and memories abounded across all four days of the nationals, after which John and Lance have remained firm friends, bonded by this unique car.

John’s adamant that, while he brought the Draggin Coupe back to life, he doesn’t consider it to be his: “I’m the caretaker of this thing – I laid down the paint and trim, but I didn’t build it.”

While he’s justifiably proud of the finished car, John says he draws greater satisfaction from seeing people appreciate it and the memories it brings back. 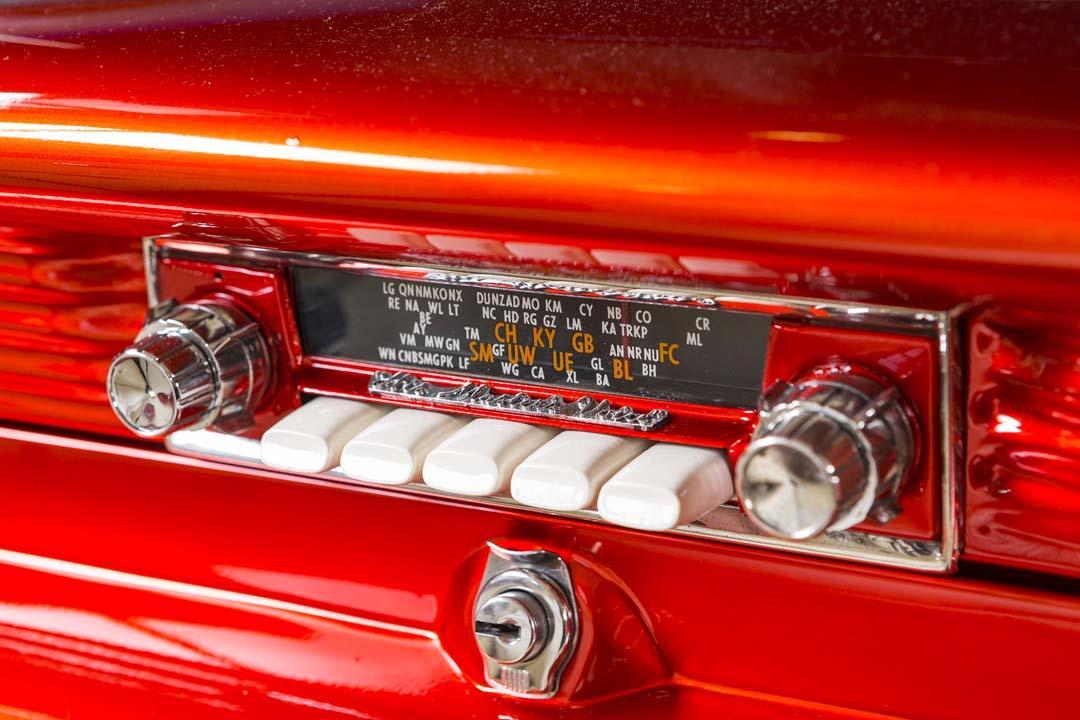 “It gives me great pride to bring back to life something that was basically dead. I think that ‘preserving history’ was a very important aspect of the build.”

While he didn’t build it, John deserves a huge thank you for making sure this historic custom Holden has not only survived, but thrived.

Thanks to Liane Wilson for assistance in compiling this article.