Is Mini’s first electric car as fun as the original formula?

Not only is Australia beginning to see a proliferation of electric cars land on its shores, but there are also now quite a few priced in the ‘affordable EV’ price point around $50,000. That’s cars like the Hyundai Ioniq – Australia’s cheapest EV – the Nissan leaf – one of Australia’s veteran EVs now in its second-generation – and this all-new Mini.

Thing is, this Mini is a three-door and has the lowest driving range of the lot of them.

It is, however, a very nicely constructed and quality feeling machine. And it will have plenty of brand appeal to some. It rolls down the line at Mini’s Oxford plant in the UK and is based on the Mini Cooper S. Rather than being a new electric platform car (like the Leaf), it’s replaced the normal petrol driveline bits with a battery and electric motor. 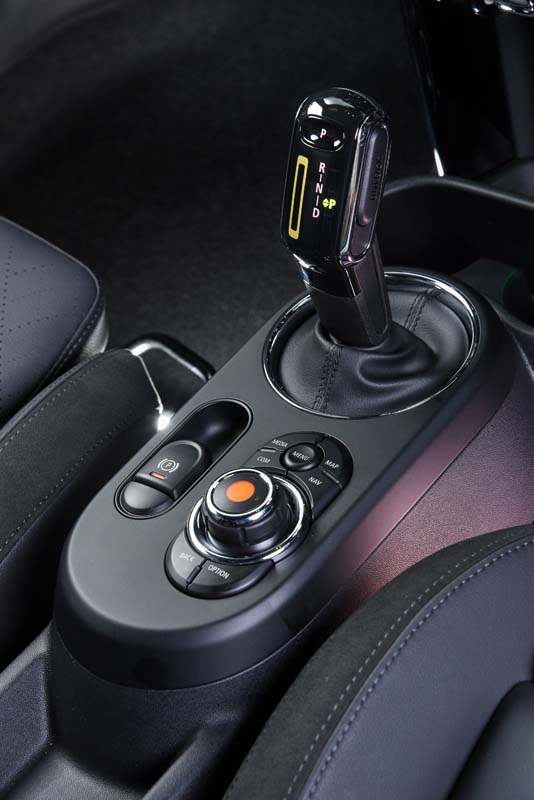 That makes it a familiar car with an unfamiliar lack of sound and ownership experience. You plug it in often at home, never visit a servo, and don’t bother thinking of long-distance trips. But it’s also one of the most enjoyable Minis to drive. 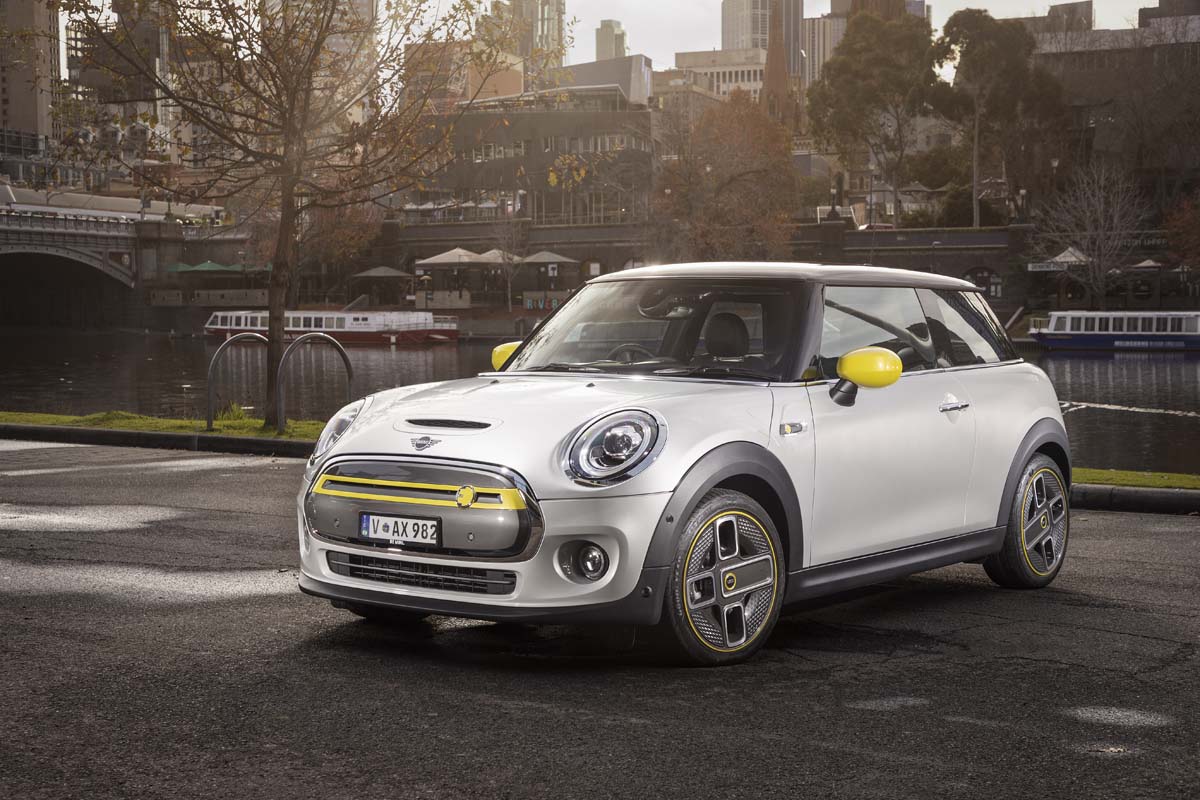 How much does it cost?

Pricing is set at $54,800 before the on-road costs, or $59,900 driveaway. It’s almost a $15k premium over the Cooper S, and around $5000 more than the Ioniq or Leaf. It is cheaper than the Hyundai Kona EV or Tesla Model 3, but they’re larger cars with much longer driving range. 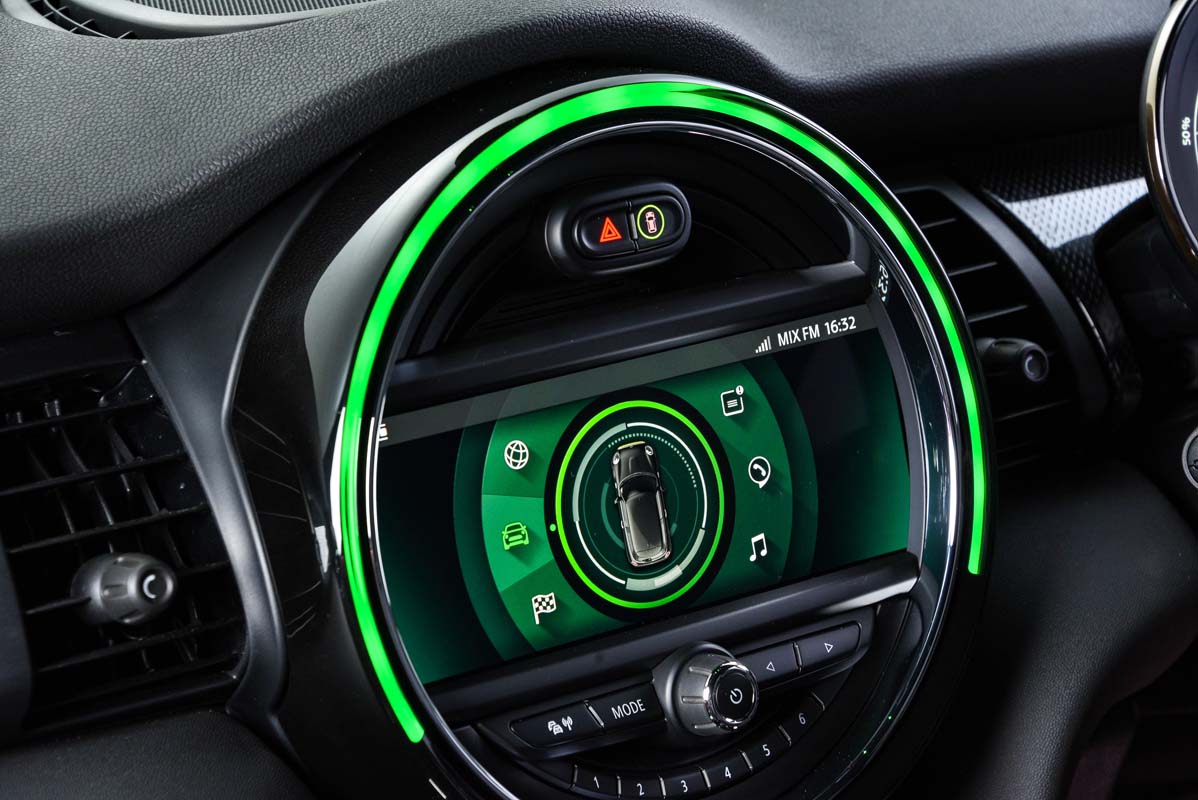 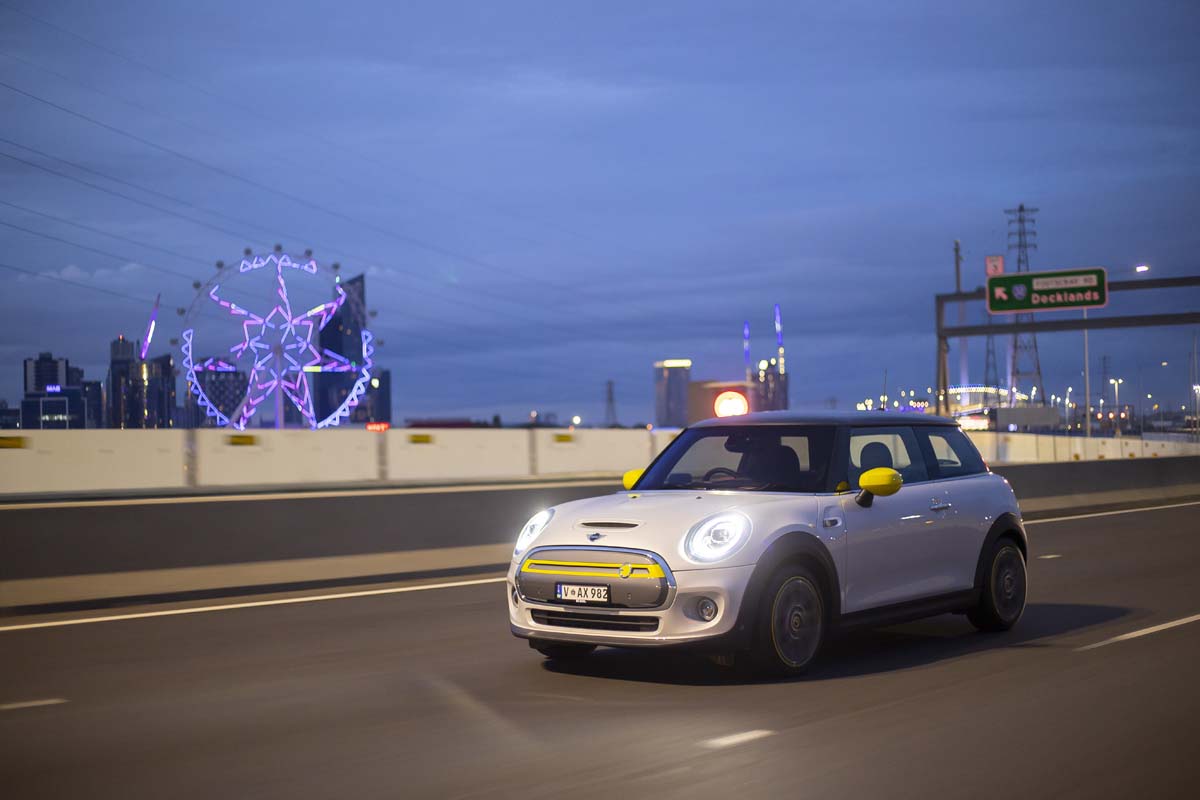 Safety comprises AEB, airbags, and electronic stability and traction controls, but there’s a lack of adaptive cruise control and lane-keeping assist, which is a distinct omission considering rivals in this price range offer them.

If you’re familiar with the Cooper, then the Mini Electric won’t be anything new. It’s a nice compact cabin, with quality upholstery on the seats and slick piano black elements throughout. The central piece is a circular infotainment system that’s rather unique and looks good, too - nice graphics, quick to use (via touch, though there’s a rotary controller) and clear, even in bright sunlight. That’s likely because the vision out of the Mini, though fine, is a little tighter due to its styling and short stature, so not much glare shines through the glasshouse. 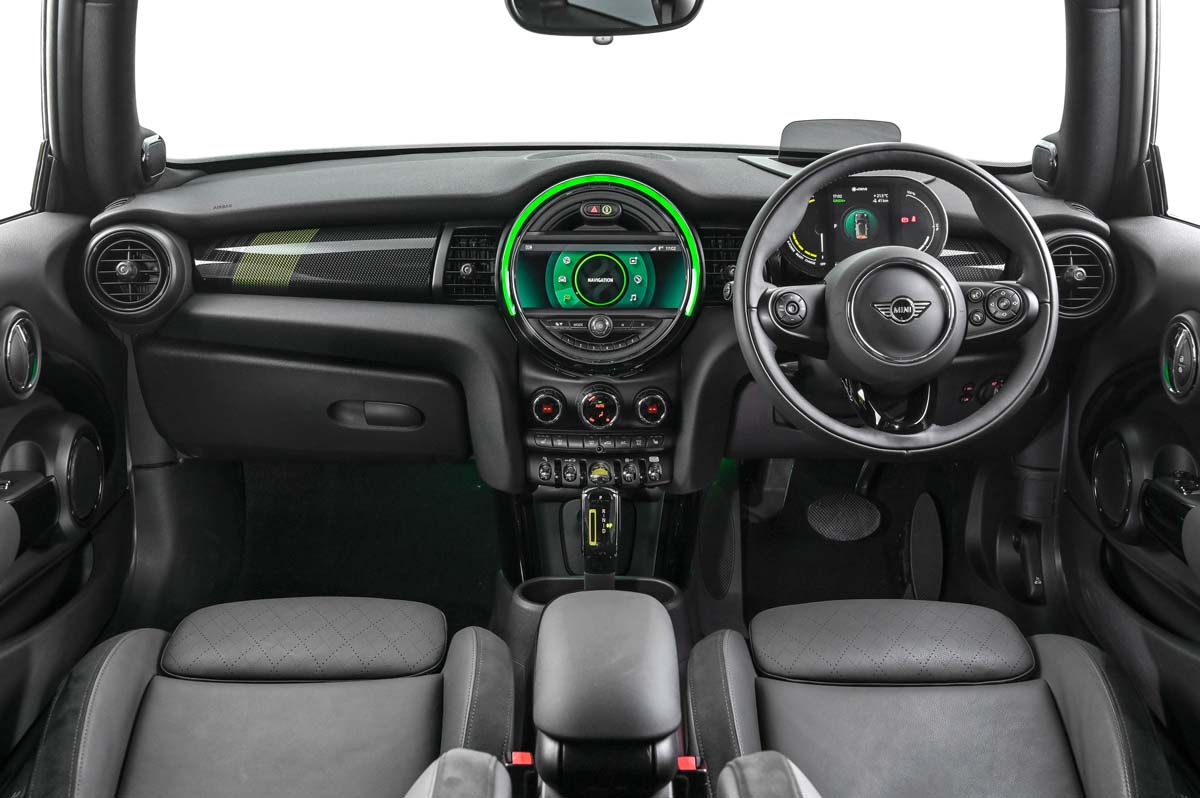 The rear is pretty tight and no surprise given it’s a three door. The front is much better, with good legroom and shoulder width between the seats. Comfort from the seat padding is supportive and there’s an armrest that can be shared.

New to the Mini Electric is a digital driver display dash measuring 5.5-inch across. It’s suitably high-tech looking and while there are 12.0-inch units in some new cars, the smaller display fits in very nicely to the Mini’s proportions. It also shows the current charging status when plugged in. The head up display is ok, but it’s not projected onto the windscreen and uses a little plastic flip-up screen instead. 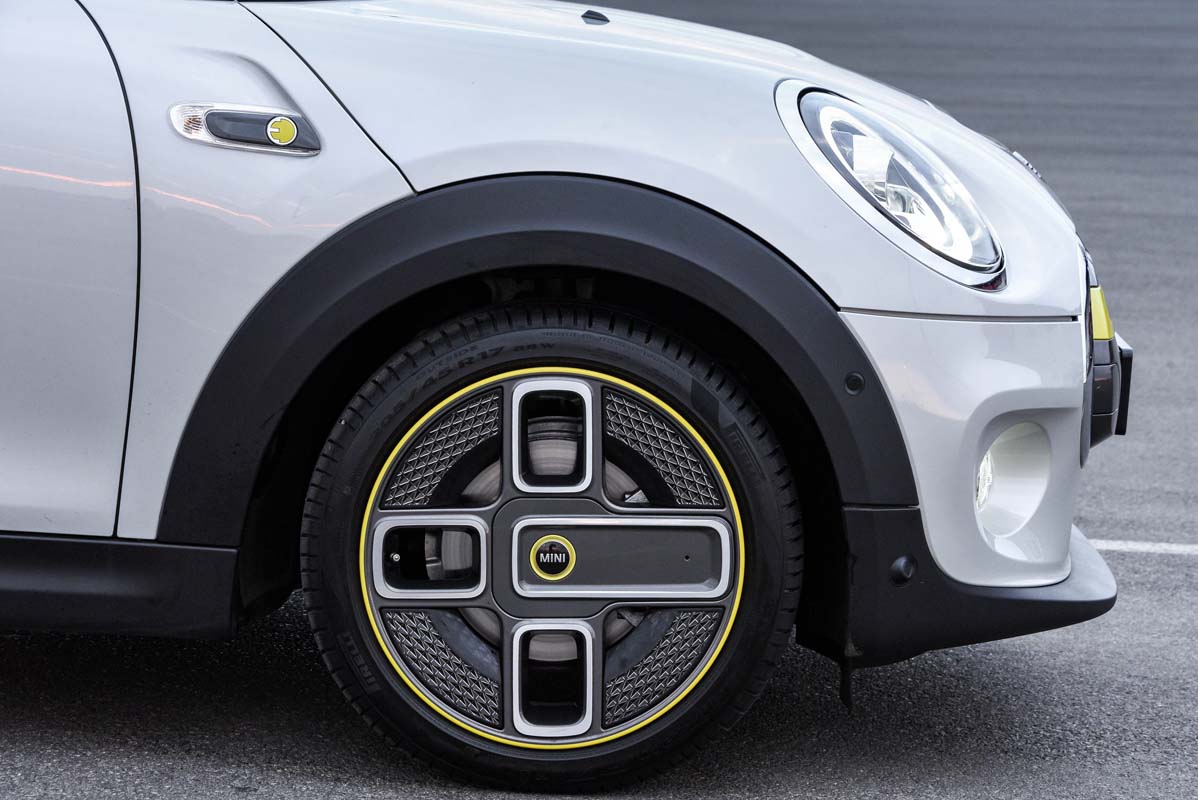 The main thing to know (and be comfortable about) is this Mini has a 233km driving range. That’s due to its small 32.6kWh lithium-ion battery which fits underneath the floor in a T-shape. It’s a logical solution to fitting a battery into an ex-combustion vehicle’s platform. Energy is delivered to a single front-mounted electric motor producing 135kW and 270Nm of torque to the front wheels. 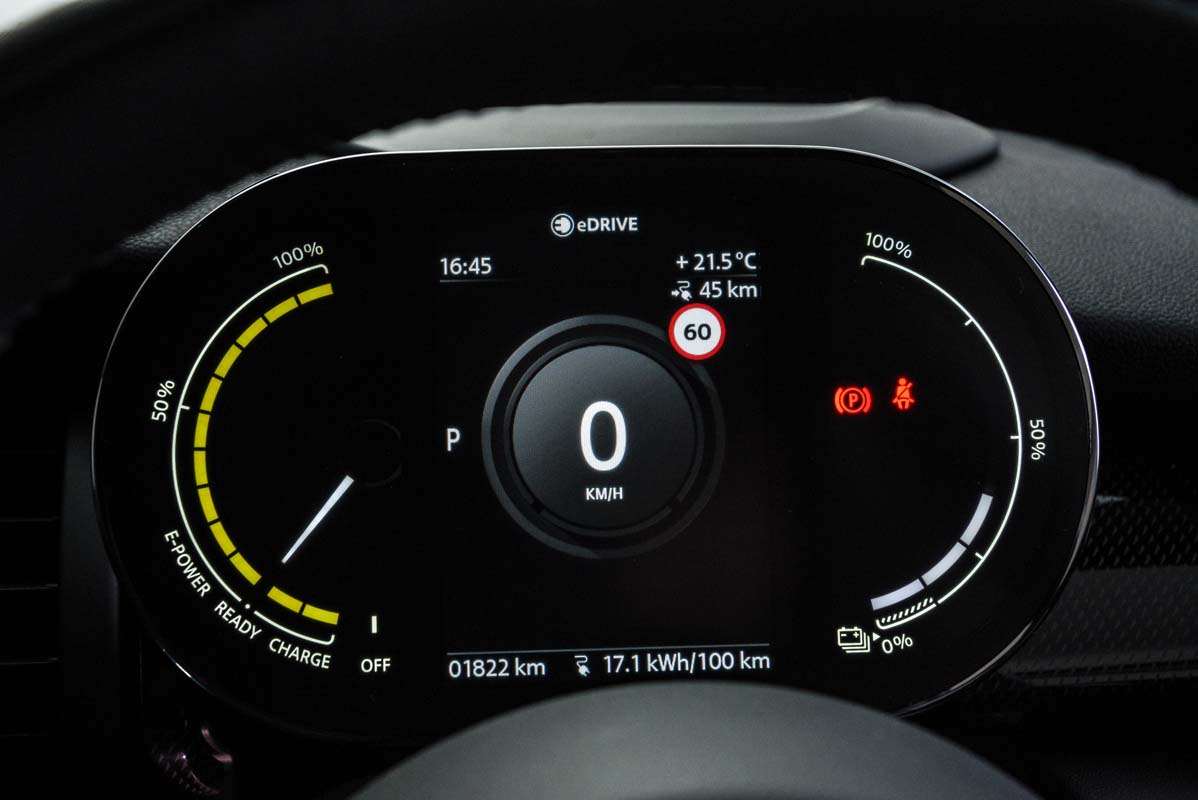 With a claimed 0-100km/h time of 7.3 seconds the Mini Electric feels predictably zippy in use, and not just to the usual 60 and 80km/h speed limits. It’ll overtake fast at those speeds and continues onwards to about 110km/h before the gusto gives up. That’s more than enough for the predicted city-bound use most Minis will be subjected to.

While Mini says the range is 233km (WLTP tested), the car knows better than to simply state the maximum range at all times. Instead, it will monitor current conditions – like if it’s cold and you’re using the heater and heated seats – and adjust the range. For us, our fully charged test car said we had 129km range when we hopped in, a testament that whoever had been driving it last was giving it the full beans. 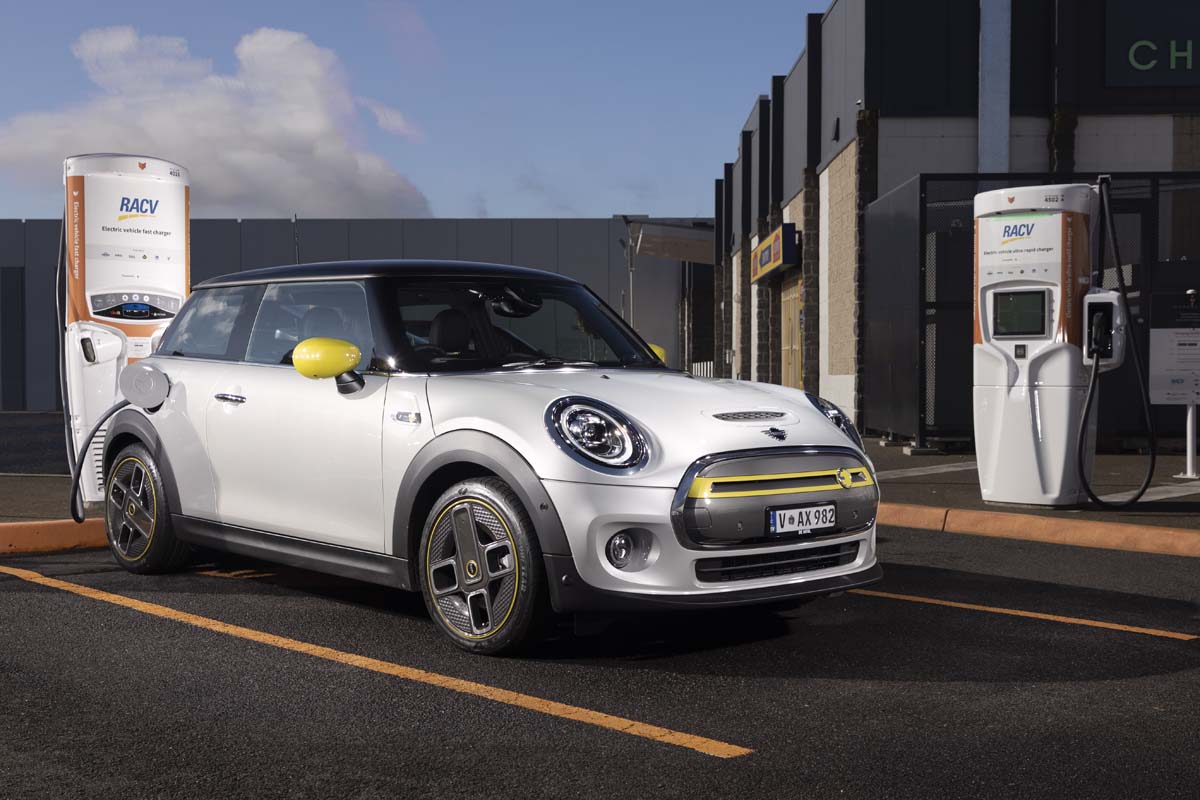 We proceeded to cautiously make our way up Mount Dandenong in Victoria – a hard test on an electric vehicle’s batteries in itself – and realised that there was plenty of range in reserve once the car figured it wasn’t being wrung by the neck.

Without a motor noisily labouring away upfront, the drive is rather quiet and calm. Road noise is about the only discernible bustle in the cabin but it’s only noticeable at higher speeds – not when zipping around the 'burbs. There is a little bit of whine from the electric motor outside, too, so people will suspect it's an EV, even if they don't pick up on the cues in its unique styling. In fact, we had more looks driving around in this thing than some hot rods lately like the Chevrolet Camaro ZL1 and Ford Mustang R-Spec – go figure. 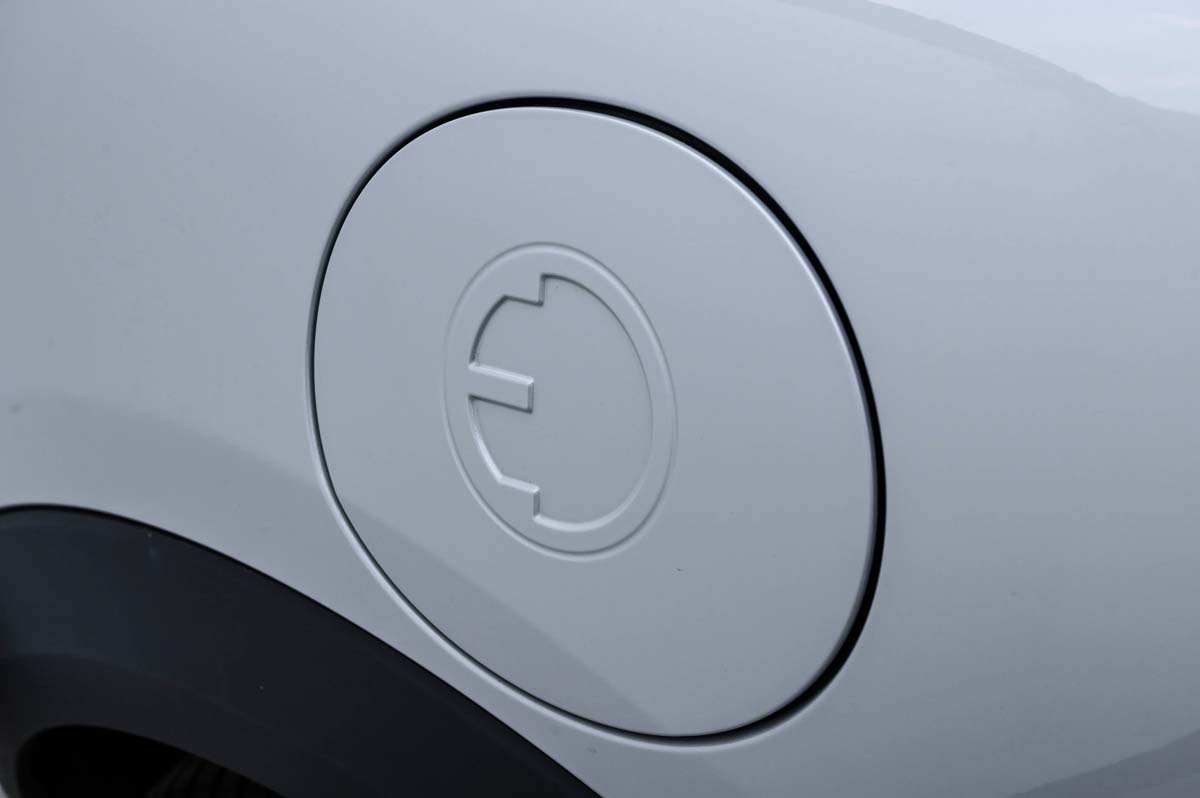 Under brakes, the regenerative energy system brushes off speed quickly and the pedal feel is different to a normal car with discs and pads. But it allows for single-pedal driving, so when you come off the go pedal the brakes automatically engage. You can turn this off, but it helps maximise range by regenerating power often. 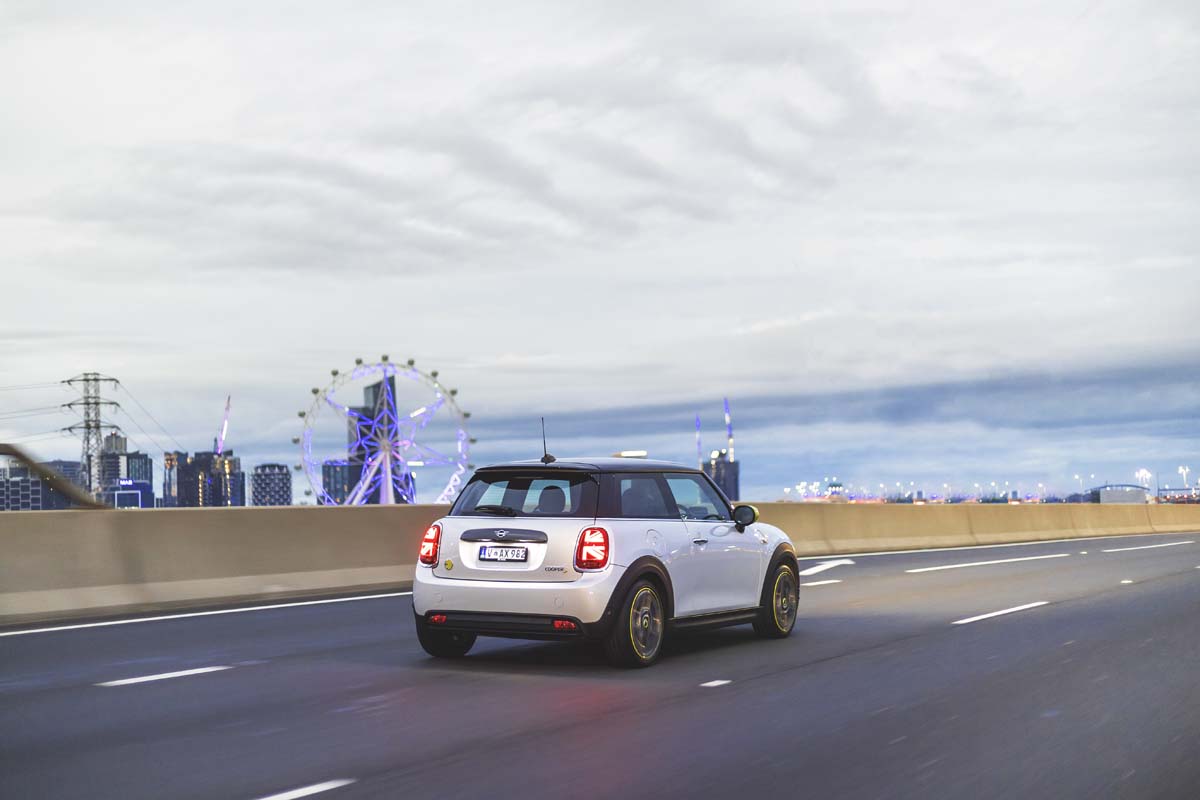 The ride feels (though without a direct comparison on test) a bit firmer than the Cooper S sibling it is based on. The dampers and springs are all likely firmer due to the added weight from the battery, but it's still compliant over most bumps and lumps in the road. And for having some fun, the Mini Electric is about as much fun as said Cooper S. 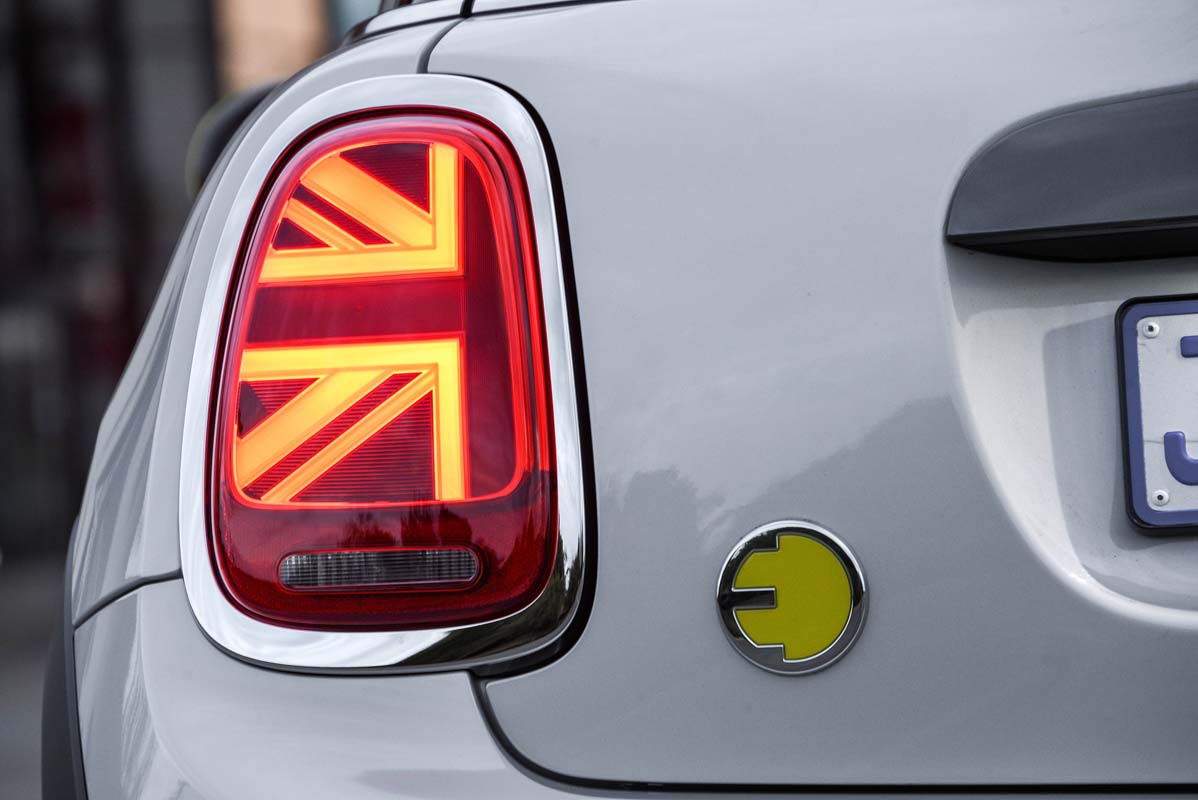 Although the ultimate performance goes to the petrol model, the Mini Electric is a lot of fun to drive. With torque available instantly in the EV, an electronic front differential and a short wheelbase that eats up tight roads, it feels like a well-sorted go-kart. 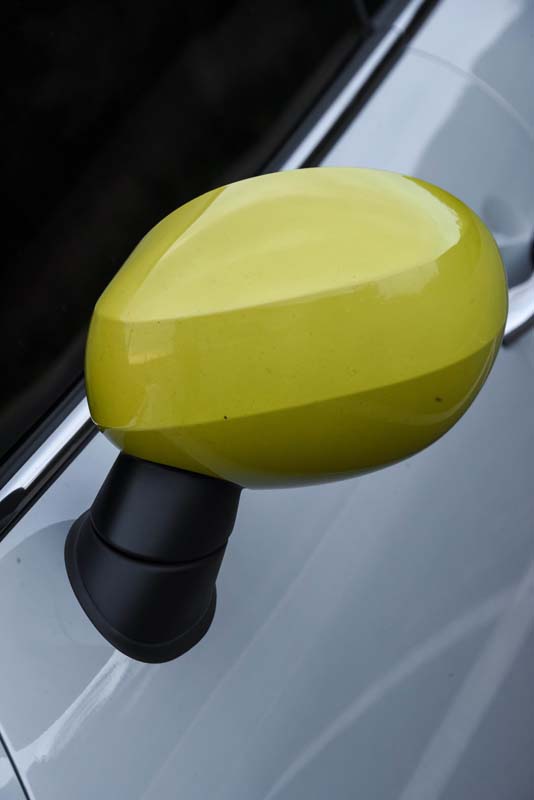 What about recharging and range?

Our journey continued down the mountain and into Melbourne, where we stopped to grab a quick recharge. We were down to 58 per cent battery after around 100km driving (including some spirited driving) and used a free 22kW charger for 45 minutes. This gave us a 10 per cent top up in battery capacity. 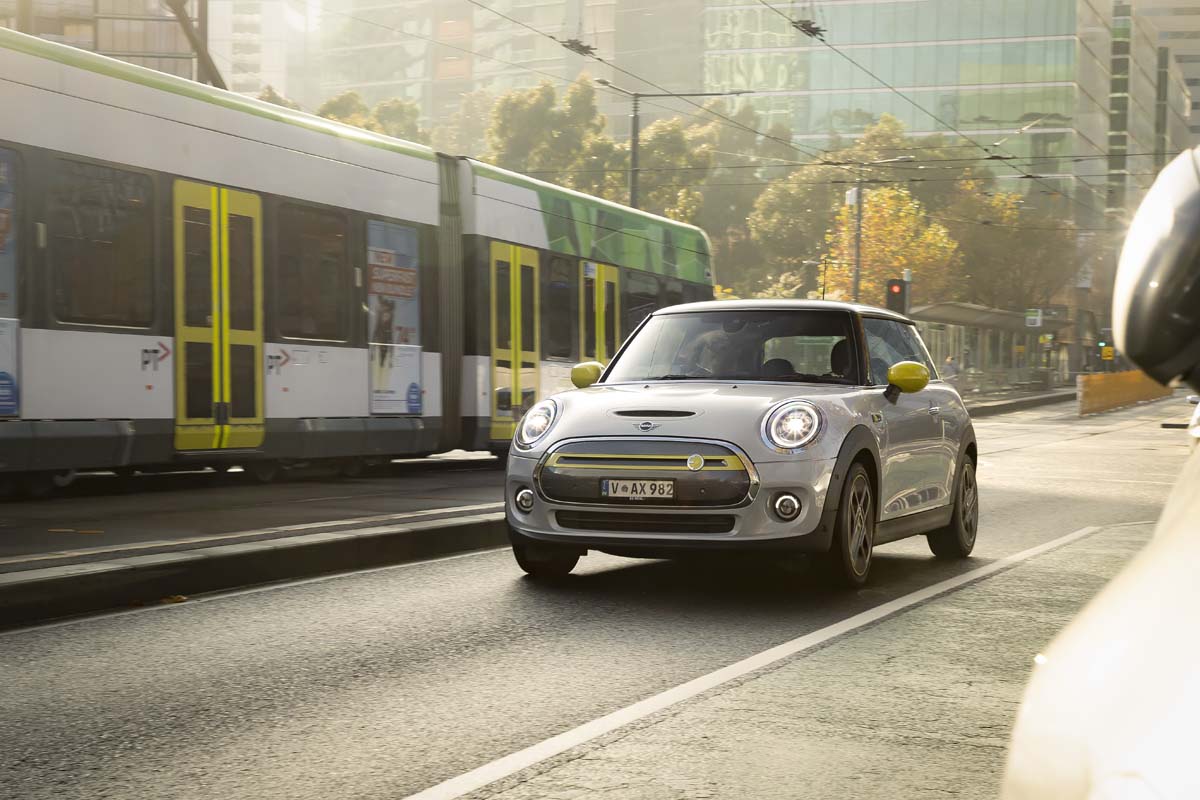 Included with the Mini Electric is a CCS Type 2 charging plug with 5 metre lead. You use this at public charging stations and a normal house outlet at home (unless you install a wallbox charger at extra cost).

Using the most powerful 150kW fast chargers available, recharging time from 0-80 per cent is 35 minutes. Using a general power outlet (GPO) at home, the same recharge will take overnight.

For drivers who don’t need to travel great distances, the Mini Electric's range won't be much of an issue. If you plug it in when you get home or at work, it should always have enough range for most occasions.

And for many who want a Mini, they’re looking for a car that looks as good as it goes, which exactly what the Mini Electric is.